A few months before Sinclair's departure, the NEB sold off Radionics' TV and calculator product lines and development. With Sinclair out of the way, in September 1979, the Board renamed the company Sinclair Electronics. 'Electronics' was deemed more appropriate, more modern than 'Radionics'. The decision to retain the Sinclair name may have been a deliberate attempt to snub the man himself.

In any case, in January 1980, the company became Thandar Electronics and was soon effectively sold off by the new Conservative government by merging it with Thurlby Electronics. It survives today as TTi - short for Thurlby Thandar Instruments - which makes electronic test and measurement instruments. 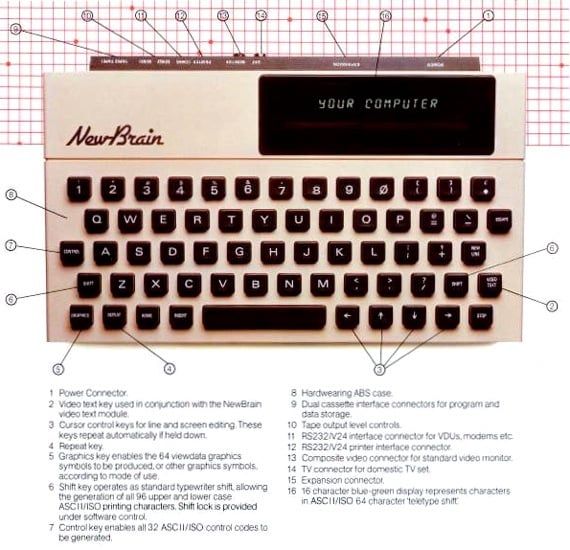 The NEB also had an interest in an electronics company called Newbury Labs, after acquiring a £343,000 stake in the firm in 1977, though in 1978 this share was sold at another company in which the NEB had a stake, The Data Recording Instrument Company. Ownership changed, but the NEB still had oversight.

In between the launch of the MK14, the collapse of Radionics, the exit of Clive Sinclair, and the formation of Sinclair Electronics, the NEB transferred the Wakefield/Smith micro project to Newbury.

Newbury continued the work. It was here that it became known a the NewBrain. Early in 1980, Newbury was ready to show off three prototypes - dubbed the M, the MB and the MBS - and discuss the product in public. Personal Computer World magazine's Dick Pountain would later say of the device shown in 1980: "The design concept was significantly in advance of anything that had been seen in the field of handheld computing."

From Newbury to Grundy

No wonder: the MB was a compact machine with its own display and a built-in battery. The MBS would use low-energy parts to maximise battery life. Newbury advertised all three units in the computing press throughout 1980.

Quite why the NewBrain wasn't released that year isn't clear. Most likely it was a casualty of the changes taking place at Newbury itself. With an anti-nationalisation government now in power, the NEB's role as a government puller of industry strings ran contrary to the administration's privatisation agenda. Its powers were curtailed. In 1991, it would be eventually privatised itself, as British Technology Group, or BTG. 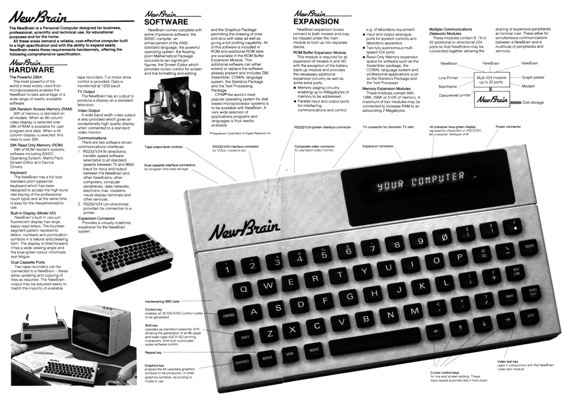 During this period, Newbury MD Bob Smith left the company to join electronics firm Grundy. Did that prompt the transfer of the NewBrain to a third owner? It's hard to see the situation otherwise, but whatever the case, in September 1981, Newbury Labs formally sold the NewBrain to newly formed Grundy subsidiary Grundy Business Systems. Many key NewBrain staff - among them Mike Wakefield and Basil Smith - joined GBS at that time.

It wasn't simply a case of flogging the machine off. Newbury, don't forget, was controlled by the NEB, which by now had been merged with the National Research and Development Corporation and been renamed British Technology Group. BTG may have handed over NewBrain to Grundy, along with a £235,000 cash injection, but it got 30 per cent of Grundy Business Systems in return.

Money was always the problem. While Sinclair set price targets which governed what the ZX80 and ZX81 developers could achieve and thus yielded rather basic machines, Newbury arguably promised more than they could deliver - not for the first time in the computer industry.

Next page: The BBC Factor
Page: