Amazon have marked a sharp change in corporate direction by buying up 3D mapping start-up UpNext yesterday for an undisclosed sum.

It's a bold move for the e-tailer and puts it head to head with other tech giants piling into the area. Apple bought up a 3D mapping start-up C3 several years ago and will release a native mapping app in three dimensions in September. The new Apple map for iOS6 will boot Google maps off the iPhone and iPad. 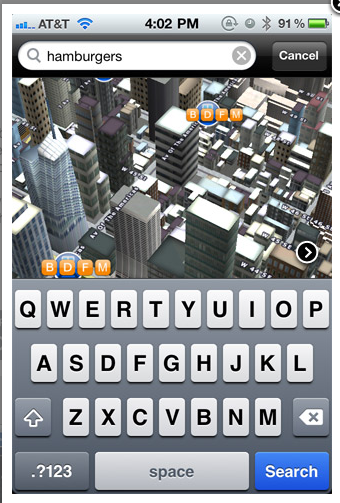 Search for hamburgers in three dimensions

The UpNext 3D city software had existed as an app on Kindle, iPhone and Android prior to the buyout, that Gigaom reported was finalised for an undisclosed sum on Monday.

Founded in 2007 by high school friends who drew on backgrounds in economics modelling, games design and business studies, UpNext had been running off its own funds until it picked up $500,000 in VC funding for the 3D part of its business in March 2011.

The applications of 3D mapping go far beyond helping tourists find the nearest coffee shop: though that is pretty much all the UpNext promotional video explores. Future trends such as the internet of things and the immersive web will make detailed 3d location much more valuable, and the potential to pull in real-time information could enable a future generation of apps.

UpNext's ability to map areas within buildings - they did the Super Bowl stadium last year - could have more obvious and immediate business applications.

In the short term, UpNext could provide a mapping service for Amazon's Kindle Fire tablet - though that lacks GPS.

Playing against Google's vast expertise in the area, and Apple's vast funds this is not an obvious next move for the etailer: but then it is probably not a massive investment either.

Neither Amazon nor Upnext were commenting on the deal. ®