Answer to life, the universe and everything coming soon

CERN boffins have finally hit paydirt with the Large Hadron Collider, finding a particle that is pretty much almost certainly the long sought-after Higgs boson. 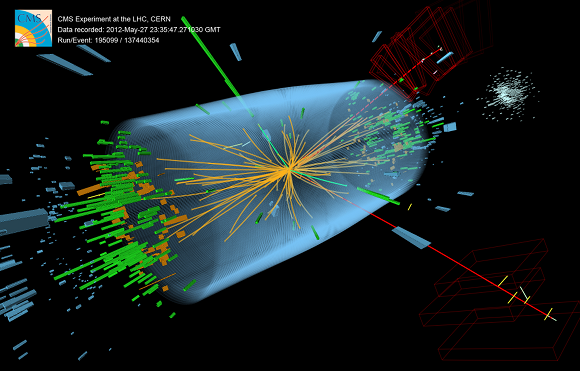 LOOK - THERE IT IS! IN THERE SOMEWHERE!

Where before numerous findings of "strong evidence" for the God particle have made researchers sort of sure Higgs boson is knocking around somewhere or to put it scientifically have given around a three sigma certainty or one in 550 chance of a statistical fluke.

Now CERN reckons it has reached the holy grail level of certainty, 5-sigma, where there's only a one in 3.5 million chance that a statistical fluke created the signal.

The ATLAS and CMS experiments announced their latest preliminary results at a seminar in Geneva this morning, after the research groups raked through the data from millions of particle collisions. Both agree that they've seen a new particle in the mass region of around 125 to 126 gigaelectron volts.

"The results are preliminary, but the 5 sigma signal at around 125 GeV we’re seeing is dramatic. This is indeed a new particle. We know it must be a boson and it’s the heaviest boson ever found," CMS experiment spokesman Joe Incandela said.

But being scientists, the CERN boffins also wanted to stress that the results were preliminary and they still want to run the numbers a few more times to be sure.

"The implications are very significant and it is precisely for this reason that we must be extremely diligent in all of our studies and cross-checks," Incandela said.

Despite the typically reserved language however, there's no doubt that the longest and most expensive scientific search is nearing its end. Spotting a glimpse of the Higgs boson is not enough to answer all the questions though, the boffins want to pin it down and poke it to figure out if it is exactly as expected and how it fits into the Standard Model.

That theory describes the entire physical universe, every bit and piece that makes up everyone and every visible thing and the forces that act between them - but visible things only make up around 4 per cent of all matter, and SM posits that there are very heavy unseen particles that would make the whole thing hang together. The Higgs could be the simplest version of what the Standard Model would expect it to be, or it could be different in ways that fit the theory but help physicists to figure out even more stuff about our universe – such as where all that pesky missing matter we can't see is hiding.

"We have reached a milestone in our understanding of nature," CERN director general Rolf Heuer said. "The discovery of a particle consistent with the Higgs boson opens the way to more detailed studies, requiring larger statistics, which will pin down the new particle’s properties, and is likely to shed light on other mysteries of our universe." ®