Wants his balls back from over Apple's garden wall

Analysis Rupert Murdoch has split News International in two, separating publishing (including his British phone-hacking-accused newspapers) from broadcasting and entertainment (everything else).

Commentators reckon the move is to protect the latter half from the “contagion” of the press ethics scandal engulfing the journalism arm of News Int.

Murdoch didn’t allude to this in what’s purported to be a memo to employees, but he did talk tablets and smartphones. According to Murdoch:

Smartphones will get far smarter and grow rapidly over the next 5 years, from 120 million active phones to 225 million in the US, and from 835 million to 1.7 billion in the world. These technologies will permeate all parts of life — including education — and it is my firm belief that these two companies will be best positioned to compete in this rapidly evolving global economy and distribute our premium content on these platforms.

Hot metal talk from a man who broke the hot-metal unions. If the missive is taken at face value, it’s significant that the Dirty Digger focussed on mobile. Is Rupe finally putting mobile computing at the cutting edge of his empire?

Murdoch placed a heavy emphasis on what he called a “greatly undervalued” publishing business. He said:

Our aim is to create the most ambitious, well-capitalized and highly motivated publishing company in the world, consisting of the largest collection of our news and publishing brands, as well as our groundbreaking digital education group.

Things couldn’t have gone worse for the ageing press baron and technology since the emergence of the internet.

He fumbled MySpace and allowed Facebook to become the world’s number-one social networking site. On tablets, he initially put all the publishing arm’s eggs into the Apple tablet basket, completely surrendering control over content to Cupertino’s censors and tying itself into one single company’s fondleslab roadmap. To be fair to Rupe, a few years back Apple did seem like the only game in town: one tablet fed by one App Store.

The Times online disappeared behind the pay wall in May 2010, supposedly to create a “sustainable footing” for journalism by charging punters to read articles, whether on the web or via an iThing.

The problem in betting on Apple, as News International did, is that it's a relatively limiting strategy. We all know Apple owners like paying more than everybody else for exactly the same service or product, and they have high levels of disposable income, but they are not a mass market.

35,000 people read the iPad every day, a small number of whom (10,000) spend 45 minutes or more a day reading the paper on the gadget. Oh, and the average household income of those iPad types is £109,000, but then again, they are iPad owners. It is not all about high value: some of the subscriptions, about 2,000, have come in through the door via discounting through places such as Groupon, but more have followed various specials; the Sunday Times Rich List, the Mandelson book serialization, for example.

The iPad is the world's best-selling tablet, but if you want mass market in a real sense then Android is the next best play. Android is nipping at Apple’s heels in markets, which can’t afford an iPhone nor an iPad, outside the fat but economically crippled North America and Eurozone.

The problem with Android, however, is its fragmented nature: so many handsets with different screen sizes, chipsets, form factors and languages. For example, I met the IBM team that runs the entire tech at Wimbledon Tennis championship last week and collects and serves all their data to the public through the redesigned Wimbledon website. Ninety per cent of their mobile traffic flows to iOS devices. Android has grown quickly in a short time, they said, but remains a distant second, with Samsung the biggest Android handset maker.

IBM is watching closely to see what Android devices break out. 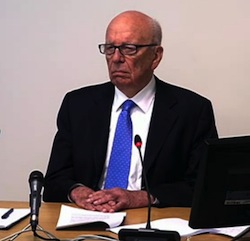 Rupert Murdoch at the Leveson Inquiry

Now there is another option to consider: rather than build a native app, go with HTML5. It’s the policy being pushed by Mozilla Foundation as it encourages app and content authors to write using the open and portable language of the web instead of coding specifically for vendors' hardware. Mozilla, which opened its HTML5 app store in June, is relying on the write-once-run-anywhere nature of HTML5, much like Google and Java for Android.

Two Chinese manufacturers, ZTE and TCL Communications Technology, will manufacture the first Mozilla phones, which will be powered by Qualcomm's Snapdragon system-on-a-chip processors. These devices will ship in Brazil next year thanks to carrier Telefónica.

Wimbledon’s IBMers liked the idea of a write-once-run-anywhere HTML5 handset, but said it’s still far too early to throw everything into the markup language. They will keep watching.

News International faces the same choice, hence, the reference to tablets in Murdoch’s memo: there is a need for a more considered approach on handheld devices, rather than simply dumping it behind the iOS walled garden and then chucking an app up on an Android store. Whether News International’s new structure will permit this measured approach remains to be seen.

One publisher has already broken free of the iPad-App Store mind think: the Financial Times launched an HTML5 app mid-2011 for all web-friendly devices. The FT did so to regain control over the content it published and in reaction to new and more draconian Apple guidelines.

However, HTML5 has had another positive impact for the FT: the Pink 'Un gained more than two million users of its software in the first 10 months. Mining the walled gardens is one thing, harvesting the broader web is another.

Even if the Dirty Digger doesn’t yet “get” the web, maybe he’s showing signs of taking it seriously. ®