One of the very many reasons there won't be quantum computing any time soon is that the quantum bits (qubits) need to be at absolute zero - not very practical for the average server room, much less the lowly desktop. 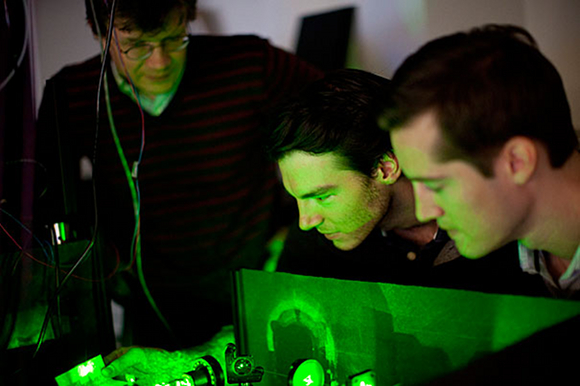 'The room temperature thing is good, but how do we get rid of this eerie green light?'

However, Harvard tech boffins have come up with a way to create a qubit in a solid-state system at room temperature that can store information for nearly two seconds, an increase of around six orders of magnitude over the lifespan of earlier systems.

Problem solved. Except for one tiny issue: to do it, the researchers had to use diamonds. (The gems were lab-grown, so they didn't have to use the world's finite supply of naturally occurring diamonds – but still, building a computer out of diamonds is surely not going to be easy, is it?)

"We have a qubit at room temperature that we can measure with very high efficiency and fidelity. We can encode data in it, and we can store it for a relatively long time," professor of physics Mikhail Lukin (pictured on the left) said in a canned statement.

Scientists figured out a couple of years ago that atomic-scale impurities in lab-grown diamonds called nitrogen-vacancy (NV) centres behave like single atoms, having a spin that can be polarised. With the help of lasers, they can control that spin and figure out its orientation. But it wasn't yet an idea they tried out with qubits because they can only hold data for around a millionth of a second before their quantum properties drop out.

They can also hit the diamond with radio frequency pulses to suppress interaction between the carbon-13 isotope and other atoms in order to extend the life of the qubit.

"We believe this work is limited only by technical issues, so it looks feasible to increase the life span into the range of hours. At that point, a host of real-world applications become possible," Lukin said.

The boffins foresee the system being used for paying for stuff (not the diamond bit, the computer bit); in highly secure networks – where it would be used for transmitting data; and for building quantum computers, natch.

The study was published in Science. ®