How the mighty have fallen – and how swiftly

According to stat-happy analyst Horace Dediu, founder of Asymco, the ratio of shipments of Windows PCs to Macs peaked in 2004 at a hefty 56-to-1. Since then, that ratio has plummeted to about 19-to-1.

But that's only counting Windows versus Mac OS X. If you factor in iOS devices, the ratio drops to less than 2-to-1. If you're a Microsoft devotee or an Apple hater – or both – that's very, very bad news.

"Considering the near future," Dediu writes on the Asymco blog, "it's safe to expect a 'parity' of iOS+OS X vs. Windows within one or two years. The install base may remain larger for some time longer but the sales rate of alternatives will swamp it in due course."

Oh, how the mighty have fallen, and how fast the empire's decline. 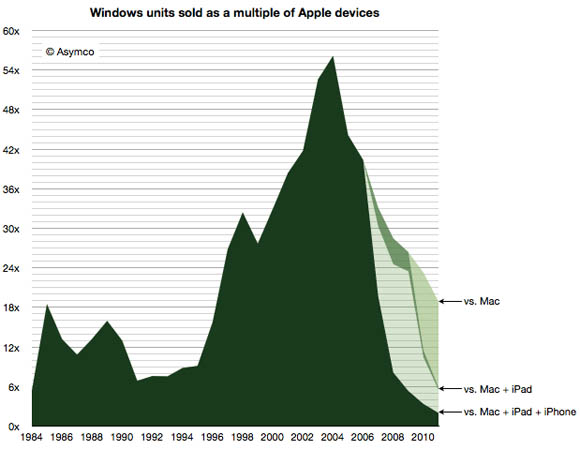 2004 was a good year for Microsoft. Since then, not so much (source: Asymco)

As Dediu rightly points out, sales ratios are not only a measure of market share, but more importantly a measure of dominance: businesses, developers, and the ecosystem in general tend to gravitate around the dominant player in any market.

To paraphrase a truism coined in reference to Big Blue, no one ever got fired for buying Windows. Or, as Dediu puts it, "The stronger you are, the stronger you get."

So what happened in 2004? Dediu suggests that one factor might be the rise in portable computing and the strength of Apple's laptop offerings. That may very well be true, but Apple's PowerBook line was already a success, and had been strengthened three years earlier when the titanium-bodied, thoroughly modern PowerBook G4 was announced in January 2001.

More importantly, the years after the turn of the millennium saw an overall maturing of Apple's product line. After the PowerBook G4, for example, the Power Mac G5, released in June 2003, introduced an easily serviceable tower for grown-ups. In August 2004, the iMac G5 replaced the Hostess Sno Ball iMac (which had replaced its fruity predecessors two years before) with a more adult, consumer-assuring all-in-one.

But perhaps more important to Apple's rise and Microsoft's decline was the January 2004 introduction of a decidedly more childlike product, the iPod mini, which was the breakaway product in that line, and which went on to solidly secure Apple's growing presence in the consumer electronics market.

And make no mistake about it, Apple is to digital-content consumers what Microsoft is to business: the dominant player. And as the BYOD consumerization of IT continues to unfold, Apple's threat to Microsoft can only grow.

There's been a quite a bit of discussion – as well there should be – as to whether the consumer-friendlier, Metro-ized Windows 8 will give Redmond a much-needed boost. One question that hasn't been frequently asked, however, is "Why should it?"

With Android available for those manufacturers and users who prefer a more-open platform, and OS X and iOS available to those who prefer the security of a walled garden, what exactly is the crying consumer need that Windows 8 will satisfy better than Android, iOS, or OS X, other than its ability to run legacy apps?

There is, of course, the possibility that the Metro experience will delight some, but it's going to have to be mighty, mighty delightful to make a dent in a consumer market in which Apple and Google's Android partners have well-established fiefdoms, and which is tunneling its way into the enterprise one handset and one tablet at a time.

In 2004, Microsoft began its plummet from hegemony. It will be more than a little interesting to see how Ballmer & Co. are faring exactly one decade later.

Speaking of the slippage of Redmond's operating system dominance, Finnish prognosticator Dediu opines, "The consequences are dire for Microsoft."