While its students may not have managed a win in the cluster compo smackdown last month, the Karlsruhe Institute of Technology (KIT) scored a resounding victory for storage technology when its researchers managed to read and write a bit of information from a single molecule.

Toshio Miyamachi, first author of the study and a researcher at the Centre for Functional Nanostructures (CFN) at KIT, said: "We … placed a single magnetic iron atom in the centre of an organic molecule consisting of 51 atoms. The organic shell protects the information stored in the central atom.”

The molecule is known as a spin cross-over molecule. When pulses of electricity are applied to it, the iron atom's magnetic state changes – as does the electrical resistance of the molecule, which varies with the magnetic state of the central iron atom. This is a memristive effect, related to the memristor and potentially putting the molecule into the class of storage known as resistive RAM (RERAM). 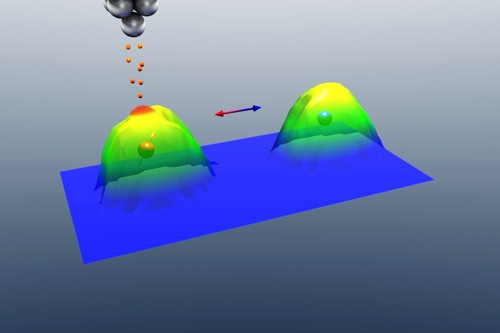 The researchers note in their paper: “These memristive and spintronic properties combined in a molecule will open up a new field of research.” Spintronics uses the magnetic spin direction of individual particles for recording data.

They point out that a bit on a hard disk drive uses about 3 million atoms while their molecule has just 51 atoms inside it, including the single iron atom they've inserted at its centre. Wow, that's 58,823.5 times denser, say 50,000X for argument's sake, which would mean a 4TB hard drive could store 200PB using molecular bit storage - except that it couldn't, as you'd need to address each bit, each recording molecule, and how the heck are you going to do that on a hard drive? You'd need a single molecule read/write head, a track density so high as to blow your mind, and a recording media surface that is unfathomably flat. The idea is straight-out stupid.

If molecular bit storage is ever going to be used, it will be in solid state storage and you will still need to access the bits – with one wire to deliver the electric pulse to set them and another wire to sense their setting. Even using nanowires, more space in the device would be taken up by circuitry than by storage.

We could guesstimate that the KIT molecule is about 1,000 picometres (pm) across. How big is a cell in NAND flash? Another guesstimate says it's 30,000 to 50,000pm across but it's going to vary with the process size and this could be wildly out. RERAM is thought to be a big scaling advance on NAND flash so the odds are that KIT's molecular level storage is sensational but not that big a deal unless it delivers, say, at least a 100X increase in density over other RERAM technologies. ®

There's a Storage Forum topic on the size of a NAND cell versus a RERAM molecule where you can post your thoughts.

Exciting news for green fuel, but quality control, financing will be a challenge