New orbiter for the planet that isn't

The Hubble Space Telescope has found yet another moon orbiting what used to be the last planet in the Solar System.

The moon, the fifth that's been spotted orbiting Pluto, is an irregularly shaped lump around 6 to 15 miles across and orbits in a plane 58,000 miles around the dwarf planet. It was spotted in nine images taken with the Hubble's Wide Field Camera in June and July.

"The moons form a series of neatly nested orbits, a bit like Russian dolls," said team lead Mark Showalter of the SETI Institute in California. 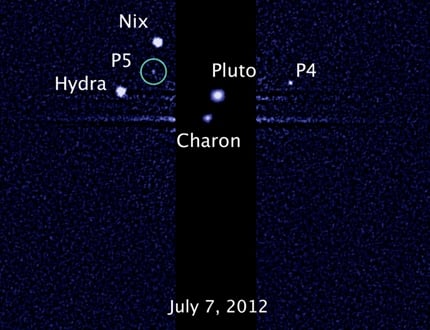 The discovery came as part of a special study of Pluto ahead of the forthcoming fly-past by NASA's New Horizons space probe, which is scheduled to buzz Pluto in the middle of 2015. The probe is traveling at over 30,000 miles per hour and the smallest impact could be fatal. NASA will fine tune the probe's course past the dwarf planet when it comes out of deep hibernation mode in 2014.

"The inventory of the Pluto system we're taking now with Hubble will help the New Horizons team design a safer trajectory for the spacecraft," commented the mission's principal investigator Alan Stern, from the Southwest Research Institute in Colorado.

New Horizons launched in 2006 and will take nearly a decade to reach Pluto, and send back the first ever detailed images of it and Charon, to be taken using the Long Range Reconnaissance Imager (LORRI). The relative sizes of the two bodies mean they influence each other's orbits, and scientists are keen to find the nature of their relationship. 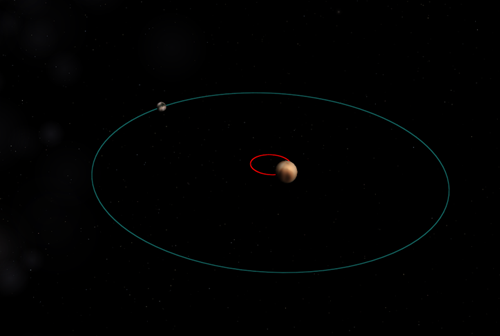 It's possible that Pluto, Charon and the other moons are all the remnants of another object which was shattered in a collision, and rings of debris have been postulated to orbit the dwarf planet. Another theory is that Pluto and its moons are disparate objects from outside the Solar System.

"The discovery of so many small moons indirectly tells us that there must be lots of small particles lurking unseen in the Pluto system," said Harold Weaver of the Johns Hopkins University Applied Physics Laboratory in Maryland.

After blasting past Pluto the New Horizons probe will fly on to investigate objects in the Kuiper Belt with its infrared and ultraviolet spectrometers, a multi-colour camera, two particle spectrometers and a space-dust detector.

Eventually the New Horizons probe, which carries some of the ashes of Pluto's discoverer Clyde Tombaugh, will become the furthest man-made object to travel from Earth. ®