The third day's keynote at the Worldwide Partners Conference is always a tough act. The night before is generally a time to party, and no one in the IT community parties harder than resellers. So 9am is not a good time for them to show Microsoft some love.

There were more than a few shaking hands and pale faces in the audience at the final keynote, and neither the VP of channels Jon Roskill nor COO Kevin Turner could manage to get more than a smattering of applause or whoops from the audience compared to earlier keynotes, despite both giving fiery speeches urging the assembled partners to attack VMware, Oracle, Apple, and Google with a vengeance.

So one has to wonder what Microsoft thought it was doing when it booked infamous 'quantum healer' Deepak Chopra to spend 20 minutes at the end of the keynote explaining how people must concentrate their emotions on avoiding conflict and raising global happiness.

"We must go beyond our constricted awareness into an expanded awareness, and ultimately into our unbounded awareness, which has no limits in space and time, and we will have come here for the true purpose that we came: To feel, to be happy, and to serve each other," he pontificated to the slightly gob-smacked audience.

Resellers are a pretty hard-nosed bunch, tending to be very focused on the concrete business of building and running infrastructure, making margin and beating the competition. It was a brave decision by someone at Redmond to think this was going to provide its partners with new insights into boosting their business.

Chopra did show off a bracelet he described as a "GPS into the soul," monitoring bodily responses such as heart rate, skin response, brainwaves and sleep patterns. In the future, it would be able to alter the body's physical responses directly via microscopic medical machines, or benebots, to repair damage, he predicted. 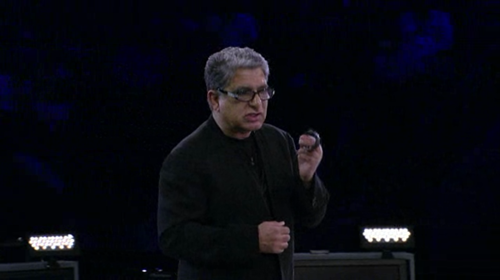 "We will soon have the capacity through our technology to repair our bodies, to self-regulate sleep patterns and immune responses, and then extend that to the social networks so that we can improve the wellbeing even of our perceived enemies, so that they are no longer our enemies," he told the keynote audience.

While this is all well and good, it's difficult to imagine a serious business plan, although the thought of brain cell repair would have appealed to some who overdid it the night before.

For those of you who don’t know Chopra, he has become famous for taking Eastern mystical ideas and cloaking them in technology concepts, notably quantum physics. He advocates quantum healing, that the body can be altered without medicine just by changing consciousness, although Chopra admitted to Richard Dawkins that the quantum stuff is just a metaphor.

Unlike most such healers, Chopra is actually a qualified doctor, although in the 1980s he joined up with the infamous transcendental and yogic flying advocate Maharishi Mahesh Yogi. In 1998, he was awarded an Ig Nobel award for Physics in 1998 "for his unique interpretation of quantum physics as it applies to life, liberty, and the pursuit of economic happiness," and counted Michael Jackson among his many followers.

Chopra may have some devotees at Microsoft, but judging from the reaction of the audience, the reseller community isn't enamored. They wanted aspirin and alka-seltzer, not quantum healing and positive emotions. ®

Voice-phished their way in, but Switchzilla claims no damage done
Security11 Aug 2022 | 1