Come on baby light my fire...

The first rocket motor tests in our magnificent Rocketry Experimental High Altitude Barosimulator (REHAB) rig went with a whimper rather than a bang earlier this week, as both solid propellants failed to ignite.

Despite the best efforts of the SPB's elite team, who occupied the Plaza de Toros in the Spanish town of Béjar for the first foray into REHAB, the AeroTech and Caesaroni units refused to kick off in a pressure of 20mbar, even though the igniters fired in both cases.

For those of you who may have missed it, there's more on Monday's low pressure Low Orbit Helium Assisted Navigator (LOHAN) tomfoolery right here.

Here's a snap of the post-test AeroTech nozzle and reload, showing the scorching (arrowed) to the inside of the former from the Copperhead ignitor, but hardly a dent in the latter: 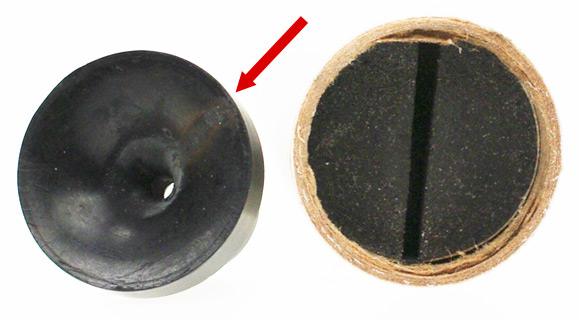 Actually, there is some slight scorching to the powder charge, leading to our initial suspicion that for some reason the heat from the igniter failed to transfer to the powder, and fire the motor.

We thought that maybe some oxygen was required to facilitate this transfer, although when we asked our reader experts for their opinion, they came to another conclusion. Tim Starling summarised:

It sounds like most well-informed commenters are agreeing that the problem is the fuel temperature in the fuel contacting the igniter. It's hard to imagine the problem fundamentally being pressure. If the rocket could only burn at 1 bar then it's not going to do well once the blast plug has popped off and the thrust has settled down to ~2 lb, since that will only provide a pressure back on the fuel of ~30 mbar. If it's going to work at all, it has to be self-sustaining in a vacuum. 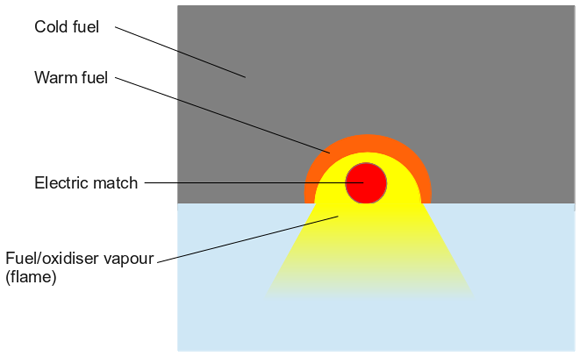 He explained: "What is relevant is the temperature of the 'warm fuel' that I have drawn orange in that diagram. If the vapour created by the hot electric match escapes too quickly, due to low pressure, that 'warm' area won't get hot enough to sustain ignition."

Fair enough, so what about sealing the motor nozzle to maintain pressure and some vestige of oxygen, thereby resolving the low pressure issue?

Not sure a sacrificial silicon seal would be strong enough, it's gonna be seeing close to 14 pounds per square inch which will probably mean it'll just pop off before you get a chance to fire the motor. Maybe a weakened perspex disc bonded to the nozzle would be better but if it is too strong it could make the motor go bang rather than burn, bit of a balancing act getting it right.

For that matter, igniting a solid fuel rocket engine (or, for that matter, even a liquid fuel rocket engine) is a study in thermodynamics as well as acoustics. When the fuel ignites, you're going to have a pressure wave radiating outwards from the point of ignition. As more and more of the fuel ignites, the pressure wave may build. It will also reflect off of solid surfaces (other wall of the fuel, nozzle, sealed top end of the engine, etc.), resulting in a constructive interference pattern. The magnitude of this pressure wave can, under the wrong circumstances, build to a value that things give way. It's very possible to either blow out the nozzle, blow out the top end of the engine seal, or even fracture the grain of propellant. Note that you do NOT want to fracture the propellant grain, since this results in an increased surface area, which is where the burning will occur. A fractured propellant grain will cause a more rapid consumption of the propellant, resulting in increased pressures, perhaps even enough to blow out the engine casing (which is VERY bad news).

Thus, before stuffing anything in the void in the center of the solid fuel propellant grain, give some thoughts as to pressure waves, and how they may behave. You not only want to cause a reliable ignition; you want to do so in a relatively gentle manner that does not cause an echoing pressure wave.

Regular LOHAN contributor LeeE reckoned there is a way of sealing the motor, although while highly ingenious, it's hardly in the spirit of our ethos "less is more":

On the basis that the problem is due to the low ambient pressure resulting in the too rapid dispersal of the initially vaporised fuel, before it can ignite the rest of the fuel, I started thinking along the lines of using an equalising chamber to maintain pressure in the combustion chamber. For example, imagine two small balloons attached neck-to-neck, with one balloon inside the chamber and the other threaded through the nozzle to the outside, this double-balloon then being inflated to just above ambient ground-level pressure: as the ambient pressure drops both balloons will start to expand, the inner balloon expanding into and filling the combustion chamber and maintaining pressure within it. Once the rocket motor has fired I wouldn't expect it to have problems burning through the balloons as it's got to burn out the igniter wire anyway.

The tricky bit is ensuring an air-tight seal around the ignition wires and the balloon neck as they pass through the nozzle and enter the combustion chamber although as the balloons expand they'll tend to occupy any gaps and improve the seal. Of course, you'd also need to take into account the fact that the igniter wire will have to run around the inflated balloon within the combustion chamber i.e. against the walls which will mean more wire in the chamber than usual.

Alternatively, if you think that the motor would be able to burn through a fine nylon mesh, just stick a small balloon inside the chamber that's prevented from expanding out through the nozzle by a fine nylon mesh placed over the inside of the nozzle opening. However, the same issues re the routing of the igniter wire apply.

As the debate livened up, an increasing number of commenters started to suggest we just need a better igniter, which could be guaranteed to deliver enough of a kick to fire the propellant.

Get some enameled copper wire from an electric guitar pickup, polish up a thin toothpick or polished steel wire from a base guitar or electric guitar string core, make a copper wire tail of about 3cm, then wind say 10 - 12 fine pitched turns around the tooth pick - be careful of the tension, too tight and it breaks and too loose and you don't get a neat winding, and you want a little "spring back"...

Then mix a paste of either some flash powder formula, or finely ground black powder whetted with some dilute gelatin in water (weak jelly mix) , and then dip your coil in the slurry.... enough to make a small pellet or rod of powder inside and around the core, then dry it and let it set.

Then use this as your electrically driven bridge wire ignitor.

You need a bigger, slower and longer lasting flash to ignite your very COLD propellant.

Yes indeed, we haven't yet begun to address the issue of the Vulture 2 spaceplane operating temperature, but we'll cross that bridge when we come to it.

Right now, we have to get the motor to fire at low pressure. Here's a dead simple idea, from multipharious:

A small bit of magnesium ribbon wrapped around the Copperhead would generate a nice sustained heat for a second if the heat of the propellant in the engine is an issue, but it would need a source of free oxygen for it to burn. Sort of a secondary igniter. I am trying to think of a powder that might do the trick. Finely powdered ferrous oxide?

Of course there were. David D Hagood was on hand with a splendidly Stateside solution:

Were I doing this here in the US, I'd just half-fill the cavity with a little loosely-packed, slow burning double-base smokeless rifle powder, put the igniter in, put some more double-base over it (again: loosely), and then some electrical tape (or Duct tape) over the bottom.

DO NOT USE HONEST-TO-PETE BLACKPOWDER. Or fast-burning stuff like for a pistol.

We have suffered the same problems as you with low pressure ignition. The flame front from the burning igniter products dissipates too quickly (thanks to the low ambient pressure), before it's had enough time to transfer enough thermal energy into the propellants to get the party started.

You can either plug the motor (would have to be done very well to hold a seal for the couple of hours of balloon ascent) or modify the igniter. We have in the past used some special sauce that was a bit of pyrogen dissolved in water (which makes a paste) with aluminium powder and iron oxide powder (rust). This paste (I call it rocket bbq sauce, but I am silly) can be applied to the igniter head in several layers (dip, let dry, dip, let dry, etc for 5 or 6 times, like coats of paint) and then will produce a lot more energy, the thermiting ali and rust powder especially are in liquid phase (molten iron) rather than gaseous as they react, which helps with gets you round the hot gases dissipating in the low pressure. You'll get molten iron being sprayed onto the inside of the motor. This will get it started.

It sounds like Mr balloonatic has previously cracked the very same problem we're having, so we reckon we should give his modified igniter a blast.

Of course, feel free to chip in with comments/objections/suggestions, but for the time being we're going to go with some shed-brewed thermite. If that doesn't work, we'll try something else, because we won't rest until the REHAB chamber blows its lid in spectacular fashion. ®