Augmented reality puts Curiosity on a sheet of foolscap...

NASA has released an app that allows would-be rocket scientists get up close and personal with the agency's spacecraft. 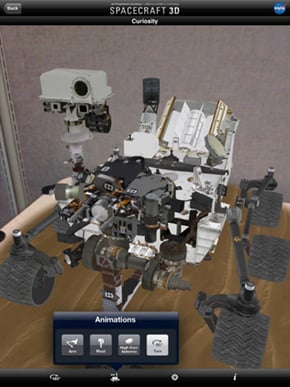 Spacecraft 3D, made at NASA's Jet Propulsion Labs (JPL), uses augmented reality animation to show how the spacecraft moves and to allow users to move its outer components.

The app, currently available only on Apple gear, gets its users to print out a target on a normal sheet of paper, and then virtually "pins" the 3D model to the target. The Jesus phone's camera then shows the model on the screen when it's pointed at the paper.

"Let's say you want to get an idea what our Curiosity Mars rover is all about," explains Kevin Hussey, manager of visualisation technology at JPL. "Like Hollywood directors sizing up their next shot, you move your camera-equipped iPad or iPhone in and out, up and down, and the spacecraft perspective moves with you. It is a great way to study the 3D nature of NASA spacecraft."

The new Curiosity rover is one of just three crafts on the app for now, the other two being GRAIL ships Ebb and Flow, which are currently orbiting the moon. But NASA hopes to add Cassini, the craft orbiting Saturn; Dawn, which is out in the asteroid belt; and the Voyager ships, which are out at the edge of our solar system.

The agency is also hoping to get other formats for the app on the go "in the near future". ®