Google will not, it seems, be selling its low-cost Nexus 7 Android tablet at a loss, but it's making less money out of the hardware than Amazon is with the Kindle Fire.

The figures come from market watcher IHS iSuppli, which has disassembled both fondleslabs and totted up the cost of the parts they contain. It also estimated how much Google and Amazon pay - $7.50 (£4.86) and $6 (£3.88), respectively - to their respective contract manufacturers to put the devices together. 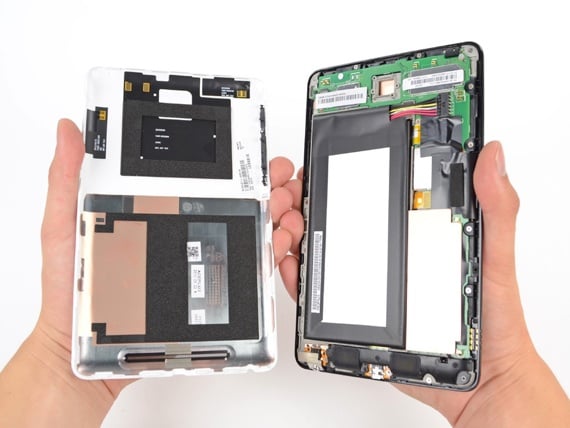 Inside the Nexus 7
Source: iFixit.com

Of course, that's not the whole story: both US giants' profit-loss spreadsheets have to factor in the cost of shipping the tablets from Asia to the States and elsewhere, plus how much thy spend to promote the products and to write the software the devices run.

But iSuppli said it reckons that Google will nonetheless still break even on the 8GB model and make a wee profit on the 16GB Nexus 7, which retails for $249 (£161.18) and costs $166.75 (£107.94) in parts and labour. Punters are willing to pay more than a proportional increase in price for the extra Flash storage.

Both Amazon and Google will be looking to make more money by encouraging tablet owners to buy content from them than they stand to make on the devices, but it's interesting that neither (yet) sees the hardware as a loss-leader. Both have room to drop the price of their tablets further, and will no doubt do so if they perceive competitive advantage in doing so - and can get more folk to cough up for high-margin digital content on the back of it.