Oiling the big wheels that keep the Paralympics moving 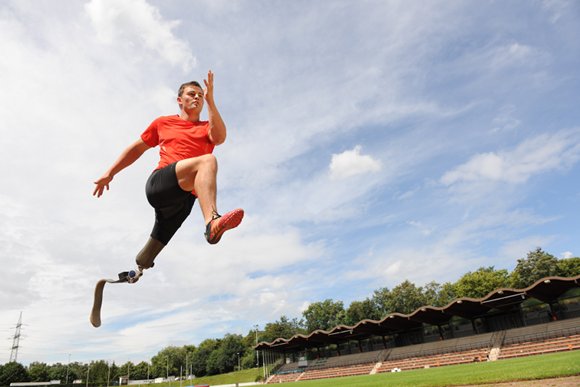 Tempest adds that the important principle is that everyone is entitled to the same level of service. Sometimes, this means competitors get unexpected upgrades.

At the 2008 summer games in Beijing, staff working in the repair centre provided a competitor from Madagascar with a whole new foot. Josefa Harijaona, a 50-metre freestyle swimmer in the S9 category (meaning severe weakness in one leg, slight co-ordination problems or one limb loss), brought his leather and aluminium prosthetic foot in for repair, but it was so out of date that the team built him a new one for free.

While the chairs take a battering, the sports limbs are treated far more gingerly, Hurst says.

“The athletes are very, very careful about looking after these – they are their event – so I don’t anticipate any major breakdowns. There will be small adjustments, tweaks – tightening bolts and so on. But really, we will be working more on the limbs they use for day-to-day walking around,” he says.

Contrary to what you might expect, the artificial sports legs used by athletes are much simpler than their everyday counterparts. But that simplicity belies the amount of work that goes into creating them.

Ottobock does everything in house, from developing biomechanical simulations through to materials research and development. But everything starts with the athlete.

“You have to begin with the person. First you build a customised socket for each athlete to fit on the residual limb. Then, if the prosthetic is just below the knee, the running blade fits directly on to that socket,” says Hurst.

"The movement of the knees is very harmonious"

If the sports leg starts above the knee, then the knee too must be replicated.

“The knee is a hinge," says Hurst. "In our case it is a hinge with sophisticated hydraulic cylinders that control how quickly the foot rises. The hydraulics respond to the amount of pressure they are under from each step, so the action should be very smooth.

“One of our athletes told me the other day that the movement of the knees is very harmonious, that they work just as smoothly at the start of a race when you are speeding up as they do when you are running at full speed. That is what we aim for.”

The design of the foot-blade varies according to the kind of sport being played. The blade has to emulate as closely as possible what the human foot does.

For example, sprinters run on their toes, so a sprinting blade tries to replicate that shape. Distance runners need something flatter, closer to the natural foot-strike pattern we adopt for a longer race.

Building the foot is a labour-intensive process. Eighty layers of carbon fibre are applied by hand to a mould. It takes two hours to do this. Pressure and heat set the layers, which are then trimmed into shape before running spikes are added.

The socket technology is as tricky as the work that goes into the rest of the leg. Get this wrong and the athlete will be in too much pain to perform.

“It is all about the socket-skin interface,” Hurst says.

“It is very personal. Some people like a silicone socket, others prefer polyurethane, and others still a fabric lining. You have to work with the athletes to develop the best one for them.” ®