Things could get interesting on Saturday

On Thursday at 5:53pm in London – 12:53pm in New York – the sun let loose with a hefty solar flare, resulting in a coronal mass ejection (CME) headed straight towards Earth that will likely arrive on Saturday at 10:20 UT, give or take about seven hours.

The flare was big, though not ginormous. As reported by SpaceWeather.com, this particular popping of one of Helios' pimples made it into the X (extreme) class of solar flares, but barely: it ranked as an X1.4.

That's certainly higher than a ranking of C (common) or M (moderate), but it pales in comparison with the top 30 solar flares since 1976 that SpaceWeather.com lists, the most powerful being an X28+ beastie that ol' Sol fired off on April 11, 2003 – and we all lived through that one, eh?

So don't expect anything untoward to happen because of this solar flare and its CME. If you happen to live in the far northern climes – we're talking to you, Thule – lift your eyes to the skies on Saturday: the light show presented by the aurora borealis may be quite impressive. 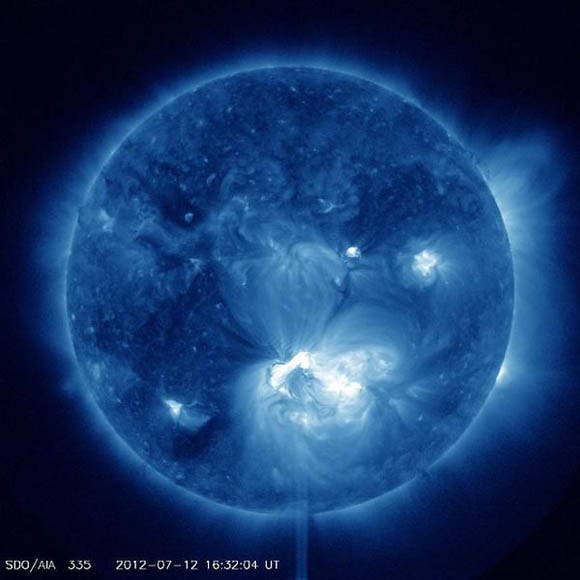 Thursday's CME would hardly be worth mentioning if it weren't for the fact that, as Spaceweather.com puts it, "everything about the blast was geoeffective" – meaning that it's coming right at us, as a Goddard Space Weather Lab animation illustrates quite vividly.

In addition to the CME scheduled to arrive on Saturday, Thursday's solar flare from sunspot AR1520 has already had two effects that have dropped in to visit.

The first was a pulse of extreme UV radiation, which disturbed radio signals around the planet. Monitoring stations in Norway and Ireland, SpaceWeather.com tells us, recorded ionospheric disturbances, but does not report whether those were disturbances in the Force "as if millions of voices suddenly cried out in terror, and were suddenly silenced."

Also, the Earth is currently experiencing a healthy dose of solar protons that were accelerated by Thursday's solar flare. While certainly measurable, this proton swarm isn't expected to cause much trouble – although, as SpaceWeather.com notes, "This could change if the storm continues to intensify. Stay tuned." ®