Now the gold’s out of Lead, bring on the xenon!

US researchers* moved a step closer to establishing a new ‘dark matter’ detection experiment on July 13, moving several tons of kit into a former goldmine in South Dakota.

The three-ton Large Underground Xenon (LUX) detector was installed into what was once the Homestake gold mine in the town of Lead, South Dakota. Due to go into service later this year, LUX had to be brought in on air bearings to protect it against even small bumps and bounces. 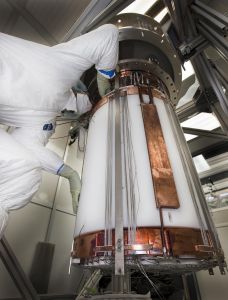 The LUX detector prior to its trip underground.

Homestake has already made some important contributions to physics: back in the 1960s, it was host to a neutrino detector 4,850 feet (nearly 1,500 meters) underground. That detector helped 2002 Nobel Laureate the late Dr Ray Davis detect “flavor changes” in solar neutrinos, thereby demonstrating that the particles aren’t completely massless.

LUX has been under test in a surface laboratory since 2010. Most of its weight is the “trashcan-sized” cryostat which holds 350 kilos of liquid xenon. Once installed in its underground lair, the detector will be watched for possible collisions between the xenon and WIMPs (weakly interacting massive particles). Collisions are expected to produce electrons and photons.

The underground location protects the detector against both surface noise and solar radiation. ®

*Bootnote: Thanks to readers who pointed out this Australian author's error. I mistakenly attributed this research collaboration to Stanford University, due to the proximity of the lab's name with that of the university.

In fact, there are several organisations involved in the Sanford Underground Laboratory, as its Website explains. ®

India to build home-grown supercomputers, from the motherboards up

But only to bits that aren’t conflict hot spots

Covered 40kms in that short time and quadrupled previous efforts