Dumpling squid do it WHENEVER THEY CAN, FOR HOURS ON END!

Need a bit of a rest afterwards, though

Physicists don’t get all the fun: biology researchers from the University of Melbourne have discovered that a species of squid indulges in three-hour mating sessions, but at the cost of a “reduced ability to swim” for as much as 30 minutes afterwards.

(Actually, to The Register that seems like a remarkable recuperative capability, since it doesn’t seem to involve coffee, cigarettes, or a defibrillator).

The guilty party is the southern dumpling squid, a tiny creature which at adult size reaches just 7cm in length (probably also saving it from being turned into an exotic restaurant dish marketed as aphrodisiac).

The researchers say the squid mates “whenever the opportunity arises” (where do they get the energy?), with both males and females changing colour during the copulation (from yellow to dark purple “with green and orange highlights). 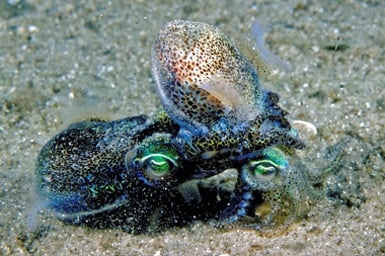 Oi, miss, got a few hours to spare? Source: University of Melbourne

Both males and females need the long recuperation, with masters student Amanda Franklin saying that the half-hour rest “suggested that the squid were suffering from temporary muscle fatigue”, and that the result was “surprising as the degree of fatigue was similar in both genders even though mating looks more strenuous for males.”

The rest period probably puts the squid at risk from predators – although the mating session also involves releasing plenty of ink – and El Reg would speculate that it may have something to do with the squid’s short lifetime of less than a year. ®