Yes, yes, the Olympics are near. But what'll happen to its IT afterwards?

2,200 switches, data-centre-sized halls up for grabs

British schoolchildren will be among those receiving computer networking gear liberated from London's Olympic park once the competition is over, said Cisco.

The company provided 2,200 network switches to create a BT-designed topology that can carry the results of the men's 100m to the world and link 22,000 on-site journalists to an audience of 4.6 billion. Cisco has also hooked up 16,000 IP phones and 80,000 access points.

When the competition is over, the equipment will be yanked out or repurposed, and the Olympic organisers' legacy team will decide who will get what.

However, Cisco UK's chief technology officer Ian Foddering said it was likely the electronics will be used in the 30-odd networking courses that his company will run in colleges and universities around the capital. As an Olympic partner, Cisco was required to leave a legacy after the Games - and it pledged to create thousands of skilled IT workers by putting forward its specialist curriculum.

Foddering wouldn't speculate on whether the switches would in actual fact be staying put in the sport venues: Prime Minister David Cameron has dreamed of a high-tech business park in the Lea Valley Olympic site after the competition to rival, er, Silicon Valley. Such an enterprise will need a half decent network infrastructure.

The hardware may also be put back into the distribution channel, although clearly marked as secondhand. "We have a strong reseller community," said Foddering. "There's demand for this." 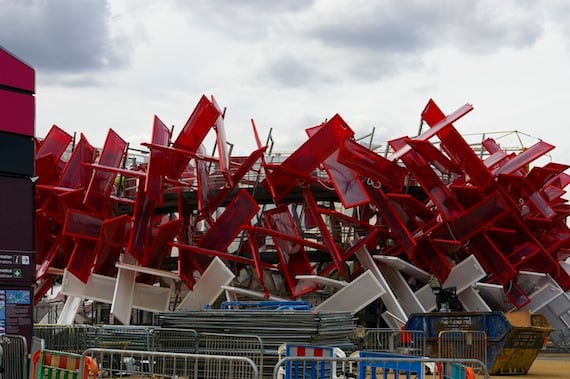 Still a bit of work to do... Coca-Cola's Beatbox Pavilion is one of the wackier pieces of architecture onsite - but about the tech underneath?

Whoever gets the gear shouldn't get too excited: The Olympics kit is not Cisco's swanky top of the range products - the switches deployed are Catalyst 6500 Series, which have been manufactured by the company since 1999.

"LOCOG [the olympic planning committee] only wanted stuff with a two-year track record. They don't want a new switch deployed specially for the event," said Foddering, who reckons the network will run at 99.999% availability, allowing a maximum of 6 seconds downtime a week.

The network infrastructure for the Games is divided into three domains: one for the organisers' office administration, one for transmitting live information such as results from venues, and a third that provides the networking juice needed to provide the on-site journalists with internet connectivity.

The three sections are hosted on the same physical switches and cables by virtualising the network: this also allows Cisco to spread the traffic load across the Catalyst switches as required, potentially shovelling more than 60Gbps through its core. 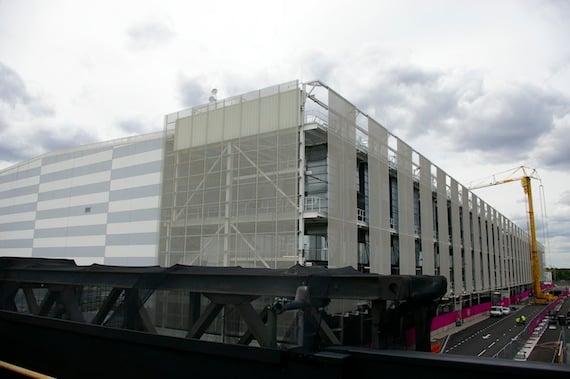 The site's media headquarters is the biggest building in any Olympic venue. It could be repurposed into a huge data centre

One of the biggest repurposing challenges after the games will be the International Broadcast Centre and Main Press Centre: a windowless grey-plated construction that's the biggest building on any Olympic venue.

It'll house more journalists than the Games' 17,000 athletes, and obviously it'll have a bar, plus about 800 Coke vending machines and a quiet room. It has been built to cater to their every need. To help prevent sweaty sports journalists appearing on camera, the site has some seriously large air-con units running all the way down the side. 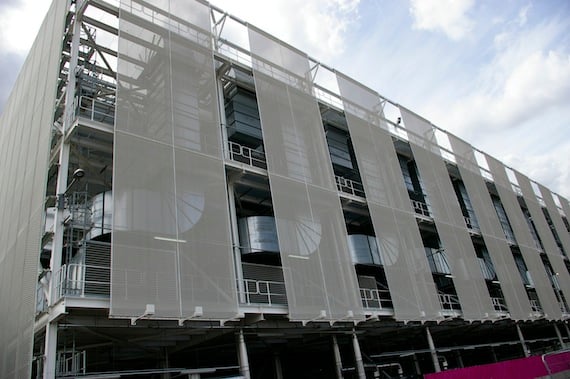 The combined media Centre could be used for events after the Games, such as fashion shows. It could be repurposed as office space, a fate likely to befall many of the Olympic buildings, or as a huge data centre.

"Given the amount of connectivity run into the place it makes sense," said Foddering. ®