The Higgs boson search continues ... into ANOTHER dimension

Special report Now that all the fanfare over the sighting of a Higgs-like boson in the Large Hadron Collider has died down, CERN scientists have a few burning questions about the particle.

The gigantic proton accelerator will be shut down this year, but physicist Paris Sphicas told The Register the boffins should be able to gather enough data about the particle's properties to tackle two of their conundrums before the big switch off. 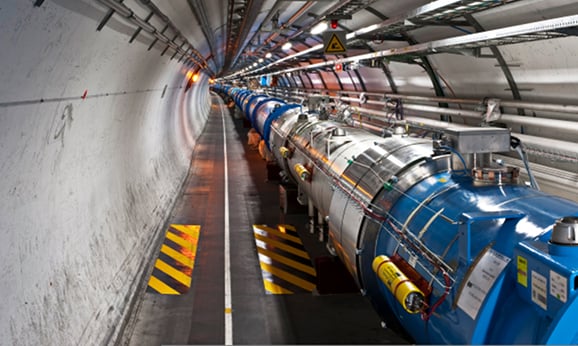 For those still baffled by last month's discovery, the proposed Higgs boson helps explain how everything around us actually exists: its own existence suggests that the Higgs field is real and that particles moving through this omnipresent field gain mass. The boson is therefore vital in propping up the Standard Model, which is modern science's least incomplete explanation of how the universe works.

However, although the Higgs field in theory gives everything else mass, it doesn't appear to be giving mass to the boson itself, a mystery that can only be answered with further study of this Higgs-like particle.

In order to confirm the Higgs-like boson is the sought-after elusive elementary particle, it has to have certain properties, such as what particles it decays into and how often it decays into specific particles.

"If the Higgs is the guy who gives mass to everybody then its coupling - in other words the strength with which it engages the other particles - will be proportional to mass," explained Sphicas, a physicist working on the collider's general-purpose experiment CMS.

"So if you count how often it goes to particle A, B or C, that frequency should be strictly given by the mass of these particles."

Another important property of a Higgs boson is how it decays: a uniform manner will indicate the boson has "zero spin", otherwise it would be all over the place and therefore probably some other particle. The Higgs boson spin has to be zero because of its quantum nature. 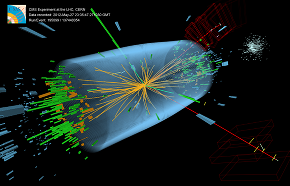 A particle collision in the LHC

"If that angular distribution of the stuff it breaks into is totally spherically symmetric, that would be spin zero. If it's anything else that would be one of the known particles," Sphicas said.

These are the answers that CERN hopes to find before the Large Hadron Collider (LHC) is powered off and spruced up for its run at the highest energy level it can achieve: 14 teraelectron volts in 2015.

"Already, what we found is a boson, we know it's a boson, no doubt," the physicist said.

"The first hint of how often it decays to the different types of particles will also be obtained with the same data that we collect up to the end of the year. And the reason is that we will have enough events to see the new boson not just in the two channels we saw it in so far but also in a few others," he added.

So surely that'll be it, then: the spin is shown to be zero and the mass-giving mechanism checked, telling the boffins this is the Higgs boson. But actually, no, as Sphicas puts it, if this boson is the Higgs, that's the point at which the fun really starts.

This is just the end of the beginning

The Standard Model of our universe isn't actually looking all that tidy with the Higgs as it's currently described. There are problems with it – and the main hitch is why the Higgs field doesn't build the actual Higgs boson into a massive particle.

"The same mechanism via which the Higgs gives mass to all the other particles would give mass to itself," he said, adding:

Think of it this way: imagine the Higgs field as some sort of sea of water through which all the particles swim. Some particles encounter more resistance and some less, the ones that encounter more get massive and the others are the less massive ones.

Now a molecule of water also swims through all the other molecules of water so it also encounters resistance to its motion. What that means is that the more massive it is, the more it will interact with the Higgs field but the more it interacts the more massive it will become and that will mean the more interaction and in fact if you go through the math, you calculate that the same mechanism that gives mass to all the other particles would imply that the guy that does this has to have infinite mass itself.

The Higgs boson doesn't have infinite mass, so where does all that mass go? The two main theories are supersymmetry or extra dimensions - invisible or unseen places to stuff all the bits of the boffins' sums that don't come out right.

Supersymmetry, affectionately known as SUSY, posits a sort of mirror world where all the elementary particles are partnered by particles related to them that we can't observe. That mirror world would interact with our world in a way that would stop the Higgs boson becoming infinitely massive.

"There's two problems in our understanding of nature right now, one is dark matter and dark energy and the second is if this guy is the Higgs and therefore we've just found every single building block of visible matter, how can the Higgs not be infinite?" Sphicas said.

"Supersymmetry could be the answer to both," he added, admitting that he was a proponent of the theory.

Next page: One Higgs boson down, er, FIVE new bosons to go?
Page: