The fault-tolerant server maker tweaked the product to run on Intel's new Xeon E5 processors while at the same time boosting the scalability of the system's underlying hypervisor.

The initial Avance product was introduced in June 2008 and is built atop the commercial-grade XenServer hypervisor from Citrix Systems.

Stratus has embedded some of the fault-tolerant algorithms and synchronization code it uses in its physical ftServer line into the XenServer hypervisor, which means that this fault-tolerant clustering is below the virtual machine layer (and therefore transparent to the operating system) much as it is below the hardware layer in a pair of ftServer machines that are linked at the chipsets to lockstep every bit that flips.

You do need an Ethernet link between the boxes so the files used by the VMs can be replicated across a pair. Avance then sits inside the hypervisor, looking for hardware faults that might lead to crashes and then decides to fail over a VM when it looks like it might.

If there is a hard crash, Avance also knows how to warm boot a backup image of a VM on the secondary machine and route users to this new image. The Avance software does not yet do application or thread monitoring inside the VM itself, but this capability is on the roadmap.

Given the tight coupling of Avance with the hypervisor, the software has not been ported to Microsoft's Hyper-V or VMware's ESXi hypervisors, which are closed source. If you want these hypervisors, then Stratus has ftServer physical clusters that can run either of these. Stratus could port Avance to Red Hat's open source KVM hypervisor at some point if it takes off commercially, but thus far it has not had to.

The initial release of Avance allowed a VM to have up to eight virtual CPUs (which can be threads or cores, depending on the x86 processor you choose and how you configure it) and 16GB of virtual memory. The underlying XenServer hypervisor could have as many as eight concurrent VMs on a single server that are replicated to a standby box. With Avance 2.0, which debuted in May 2010, the number of virtual machines was boosted to 16 on a single box and each VM could be allocated with as much as 16 virtual CPUs and 32GB of virtual memory, essentially doubling up the capacity of the Avance product.

But what's inside the latest version?

With Avance 3.0, the underlying XenServer hypervisor supports the new Xeon E5 processors from Intel and is certified to run on Chipzilla's whitebox-ish Intel Modular Server, which is a blade-ish box that Intel launched in January 2008 and subsequently updated with Xeon 5500 processors a few years back.

Dave LeClair, director of product management at Stratus, tells El Reg that these machines have pretty good uptake among some white-box server peddlers, particularly in Europe, and therefore their integrated switching and storage need to be supported by Avance.

"We haven't had any push to make Linux bigger," says LeClair, "but once we have the requests, we will certainly be able to certify it." 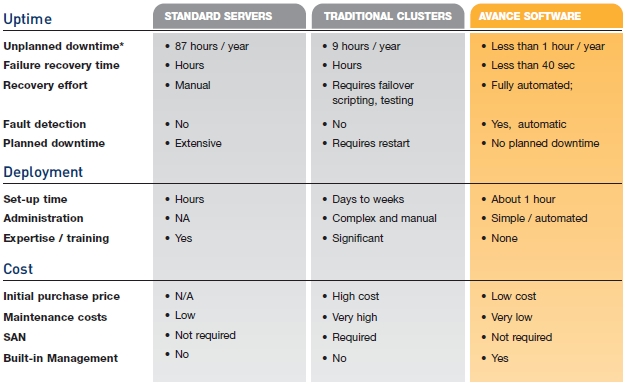 The price of Avance has not changed in the past four years. It still costs $5,000 for a pair of servers and it still includes a supported licence to the commercial-grade XenServer hypervisor from Citrix. ®