Vid A geoboffin and glacioboffin team have discovered a Grand-Canyon-sized chasm hidden under the ice in West Antarctica that they believe is helping the ice to melt.

The University of Aberdeen and British Antarctic Survey (BAS) scientists returned to the Ferrigno Ice Stream, a region of the frozen continent only visited once before in 1961, and found a one-mile (1.6km) deep chasm under the ice.

The West Antarctic Ice Sheet is losing ice faster than any other region of the continent, with some glaciers shrinking by more than one metre a year, so boffins have figured that something else other than global warming (or whatever is causing the ice to melt) is at work. 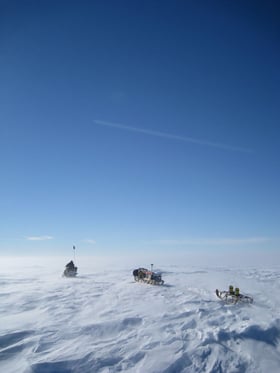 To find out what that something is, the team went out on the ice in 2010 and dragged an ice-penetrating radar system behind a snowmobile for 1,500 miles (2,414km).

"What we found is that lying beneath the ice there is a large valley, parts of which are approximately a mile deeper than the surrounding landscape," said Dr Robert Bingham, a glaciologist at the uni.

“If you stripped away all of the ice here today, you’d see a feature every bit as dramatic as the huge rift valleys you see in Africa and in size as significant as the Grand Canyon.

"What’s particularly important is that this spectacular valley aligns perfectly with the recordings of ice-surface lowering and ice loss that we have witnessed with satellite observations over this area for the last twenty years," he added.

The massive trough, scoured out by ancient ice moving across the continent, allows warmer water from the Bellingshausen Sea to flow under it, thereby moving the warmth inland and thinning the ice along the way.

The boffins think that the rift they've discovered could be part of a system of valleys under the sheet that are all doing their bit to speed up the melting of the ice.

Professor David Vaughan of the British Antarctic Survey leads Ice2sea, an EU-funded research programme to improve projections of global and regional sea-level, and he reckons understanding the rift system could help figure out how much water the ice is likely to dump into the ocean.

"Thinning ice in West Antarctica is currently contributing nearly 10 per cent of global sea level rise," he said. "It’s important to understand this hot spot of change so we can make more accurate predictions for future sea level rise."

The team's research was published in this week's Nature. ®