Boffins: VAMPIRE stars are PREYING on their companions

Astroboffins peering through the European Southern Observatory's Very Large Telescope have figured out that most of the brightest stars in the universe are constantly having the life sucked out of them by vampire stars. 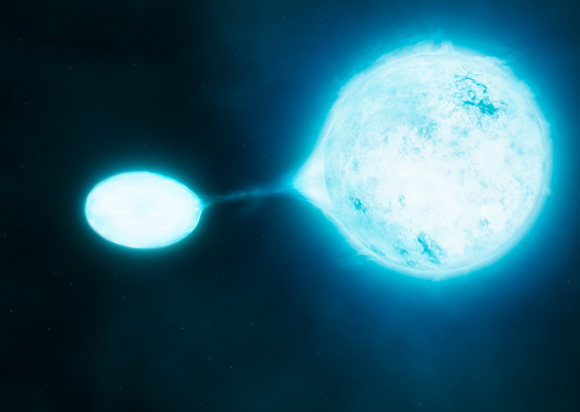 Just like all vampires, these suns are only interested in sucking on the hottest stars, the high-mass ones that drive the evolution of galaxies. While scientists already knew that vampire stars were out there, they hadn't realised how many pairs of companion stars were hiding one life-draining one.

Nearly three-quarters of the brightest stars, known as O stars, have a close companion star and most of these are a vampire and its unwitting victim, with mass flowing from one to the other. According to the researchers, a third of these pairs are eventually expected to merge as the vampire consumes the last of its hapless friend.

In general, even if they aren't going to get sucked up by a vampire, O stars tend to live short violent lives of gamma-ray bursts and galaxy evolution. The winds and shocks coming from them can both trigger or end star formation, their radiation powers the glow of bright nebulae and their supernovae spray out the heavy elements crucial for life.

"These stars are absolute behemoths," said Hugues Sana of the University of Amsterdam, lead author of the study. "They have 15 or more times the mass of our Sun and can be up to a million times brighter. These stars are so hot that they shine with a brilliant blue-white light and have surface temperatures over 54,000 degrees Fahrenheit."

The astroboffins' observations give the first precise determination of how many O stars are going through life with a pal and the high number of these companions that are life-sucking vampires has a huge effect on how scientists see the universe.

For example, as the vampire steals the fresh hydrogen from the O star, it will grow as its companion weakens. The vampire's feeding stops the bright star from becoming a red supergiant, instead its blue core is left behind. That core mimics the appearance of younger stars and could fool the observer into thinking a distant galaxy is younger than it is.

"The only information astronomers have on distant galaxies is from the light that reaches our telescopes. Without making assumptions about what is responsible for this light we cannot draw conclusions about the galaxy, such as how massive or how young it is. This study shows that the frequent assumption that most stars are single can lead to the wrong conclusions," Sana said.

Binary Interaction Dominates the Evolution of Massive Stars was published in Science. ®