UK's thirst for energy falls, yet prices rise: Now why is that?

British politicians are depleting the nation's ability to produce the energy it needs, according to state statistics.

The annual DUKES survey has provided exhaustive statistics on the UK's energy production and consumption since 1948, and the latest figures have been published by DECC, the Department for Energy (and Climate Change). The decline in domestic production capacity is illustrated by this chart: 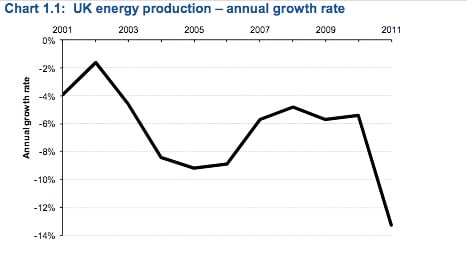 Energy production fell 13.2 per cent year-on-year in 2011. The report claimed that "the large fall is mainly due to reduced production from the UK Continental Shelf as a number of oil and gas production facilities were affected by maintenance issues" - although that neatly sidesteps the negative growth direction.

The UK is a net exporter of petroleum but imports more coal, crude oil, electricity and gas on balance. Net imports accounted for 36.5 per cent of energy used in the UK last year.

Energy demand actually fell by 6.4 per cent last year as warmer weather brought a mild winter to the UK. Meanwhile 2010 was the coldest year since 1987 and included a month-long freeze in the coldest December for a hundred years. High gas prices led to a 17.8 per cent fall in generation, and consumption from coal sources actually rose, up 1.8 per cent year-on-year in 2011. Nuclear sources saw a 12 per cent increase.

Low-carbon sources, mostly nuclear, contributed 12 per cent to the total supply in 2011. Wind and hydro remain a minuscule part of the energy supply, at under one per cent. If the renewable energy sector has a star, it's bioenergy - capturing gas from landfill and waste combustion. 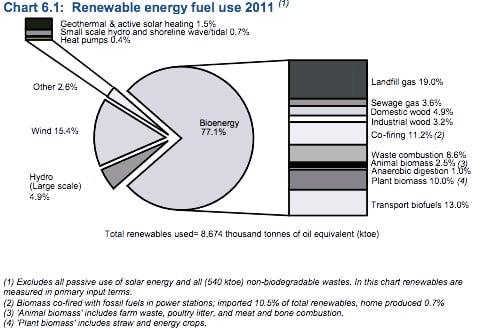 The survey [PDF] is comprehensive on inputs and outputs - but decidedly thin on energy costs, which hardly feature at all. And DECC declines to chart the increasing cost of energy. So we'll do it for you.

Nor is there anything resembling an estimate of domestic reserves, let alone a price forecast. By exploiting unconventional reserves, the United States has become self sufficient in gas and prices have fallen to a third of previous levels. The UK sits on enviable quantities of gas reserves, too.

But the bureaucrats responsible for British energy policy want us to talk about anything except the future price of energy. ®

What, under its actual name?

Behold the Internet of Turf: IoT sucks waste energy from living plants to speak to satellites

Surely only a matter of time before the Matrix has you?