Apple, Samsung begin battle for billions in US patent smackdown

Apple and Samsung's tit-for-tat patent posturing will finally come to a head in the US today, as jury selection starts on a trial that could kill a massive audience for Samsung stuff, and result in a win (or loss) of billions of dollars for either side. 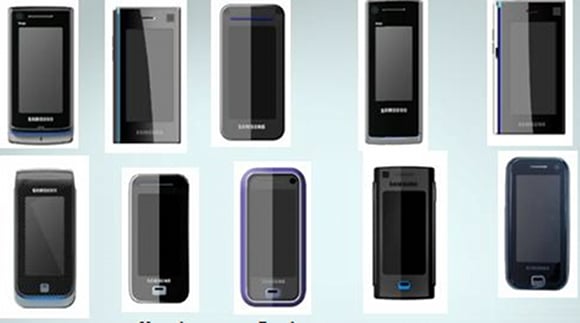 SEE, WE DID IT FIRST (Samsung's summer 2006 phone designs from a court filing)

The last lines of the battle were drawn over the weekend as Judge Lucy Koh overruled Samsung's objections to opening Apple slides featuring images of Steve Jobs.

The Korean firm said that the "gratuitous images have no evidentiary value and have been asserted in order to turn the trial into a popularity contest", but the judge didn't agree. She said that all five of the slides with the Jobsian visage would be allowed because they were relevant to the iPhone or iPad design patents.

The rest of Samsung's slide objections and Apple's oppositions to Samsung's slides were given a more or less even mix of winners and losers and there's no more time for any dickering before the trial starts today.

The bitter international rivalry between the top smartphone and fondleslab makers has had its ups and downs on both sides, but Apple seems to have the edge heading into the US trial. Judge Koh agreed with its preliminary injunction requests for both the Galaxy Nexus and the Galaxy Tab 10.1, although the Nexus ban was put on hold temporarily pending Samsung's appeal.

The theory behind these pre-trial bans is that the judge reckons the case is likely to succeed so they go ahead and take the product off the shelves, which doesn't look good for Samsung. Nevertheless, it will be the jury and not Judge Koh who decides if the Galaxy products really are "slavish copies" of Apple's iDevices.

Both sides have produced prior art that shows they were working on their devices long before the other side's one came out and while Apple is sticking to the whole you-copied-us thing, Samsung is throwing in some accusations that the fruity firm is trying to kill all competition in the market with assertions that it holds patents on industry-standard tech.

The trial is expected to last around four weeks and the 10-person jury has to reach a unanimous decision for Apple to win its patent arguments or Samsung to triumph with its standards-essential patent retaliations. ®