The Storage Performance Council 1 (SPC-1) benchmark aims to provide comparison performance numbers for a storage subsystem while carrying out operations for business-critical applications. For each tested system it delivers an IOPS score, an average response, a cost per IOPS and the total price of the tested system. 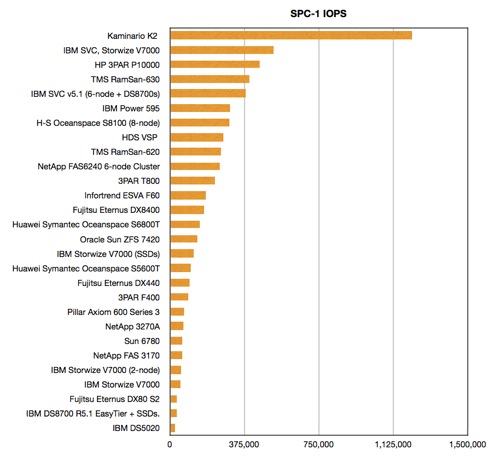 What's happened is that a 282TB disk-based storage system was bested by a 1.2TB mirrored, all-DRAM storage array. Why would we be surprised at that you might ask? It would be mighty strange if it didn't. In effect it's like having an in-memory database.

The K2-D system comprised three K2-D enclosures configured as a single array. It contained 15 IO directors, 33 DataNodes (30 Active), with each one being a server with its own solid state media and backup module. This was connected over Fibre Channel to 10 host servers running the SPC-1 workload. The Kaminario kit cost $490,760 which compares to the cost of the IBM SVC/Storwize setup of $3,598,956. It's not even a fair competition; the Kaminario kit cost seven times less, ran more than twice as fast and its average response was 3.44msecs, less than half IBM's 7.39msecs.

The SPC benchmark was conceived when solid stare arrays were exotic products and it was effectively a way of comparing disk drive arrays. This Kaminario result is so far beyond the reach of ordinary disk storage arrays from EMC, Dell, HDS, HP, IBM, NetApp and others that it's unreal. Why should they even bother trying to compete against networked DRAM storage?

If you want hundreds of thousands to a million plus SPC-1 IOPS performance and only need a few terabytes of networked storage capacity, then Kaminario or TMS are your suppliers. They blow everyone else away. For higher capacity levels you can add more Kaminario storage nodes or TMS modules and retain a cost advantage. But, if you are heading into the multiple tens of terabytes area, then it's disk arrays you need to look at, perhaps performance-boosted with flash caching or tiering.

Perhaps we need to separate flash array SPC-1 scores from disk array SPC-1 scores. It's pointless comparing Porsche 911 Turbos with UPS delivery trucks. Both use the same roads and can be compared in terms of time taken getting from A to B, but the purposes of their journeys are so different the comparison is all but meaningless. ®