Namibia expanded its role in the hunt for ancient, highly energetic galaxies this weekend past, when the southern African nation flicked the switch to fire up its HESS II telescope.

The largest Cherenkov telescope in the world, HESS II adds a 28-meter mirror to existing 12-meter telescopes that have operated in the country since 2004. The new scope's observations will eventually be used in conjunction with the square kilometre array (SKA), due to go live in 2020.

Cherenkov telescopes don’t observe their light sources directly. Rather, they pick up the flashes of radiation that are emitted when very high energy particles strike the atmosphere.

The energies involved are very high – from the GeV to TeV range. Such radiation isn’t emitted directly due to the heat of the object being observed, but rather is emitted when particles leaving it at relativistic speeds (because, for example, they were in the shock wave of a stellar explosion) strike other particles in gas clouds or interact with photons. 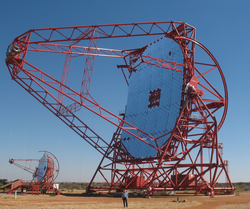 The 526-plus tonne (580 ton) HESS II will help examine the 100-plus known sources of intergalactic gamma rays, as well as surveying the sky for new sources. It’s designed to seek out sources in the tens of GeV range, which this release says is a “poorly-explored transition regime between space-based instruments and current ground-based telescopes”.

Such sources include Active Galactic Nuclei, whose gamma ray outputs suggest they’re as much as a hundred times as energetic as the Milky Way, but crammed into a volume smaller than the solar system, and with rapid “on-off” cycles that suggest the presence of supermassive black holes.

HESS II’s camera is also impressive: suspended 36 meters above the 875-facet primary mirror, it weighs 2.7 tonnes (2.7 tons). It takes 3,600 images per second, has an effective exposure time of 16 nanoseconds, and on its own consumes 8kW.

The whole rig has been designed to be aimed faster than the smaller predecessor telescopes, to capture transient phenomena. ®

It can move without anything to push off from, but only via curved spacetime
Science11 Aug 2022 | 52