Red Planet astro-truck to go down like none before it

Pics NASA's Mars Science Laboratory team is working on a landing procedure for Red Planet rover Curiosity, due to touchdown on the dust world this weekend. 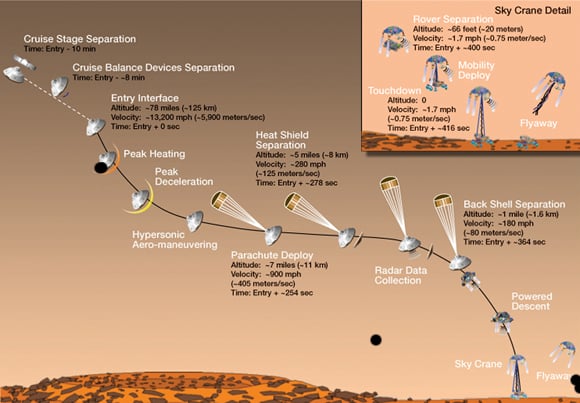 The US space agency said its flight team had started going through the motions for entry, descent and landing on Mars, while the craft itself performs its own tests and checks.

The nuclear space-tank that is Curiosity is heading to Earth's neighbouring planet to try to find signs of microscopic life, which may have lived there in the past, or proof that it ever could. Aside from the mega-bucks spent on the mission, and the high excitement of its purpose, this landing will have added fear factor: it'll be going down like no rover has ever gone down before.

Traditional Mars space-trucks including Sojourner, Spirt and Opportunity were dropped onto a lovely air-bag to cushion their fall, the de-facto landing experience for a rover.

But Curiosity is huge - the size of a small SUV - so air bags are not its thing. Instead, the rover will be lowered onto the Martian surface by a "sky crane", a brand new system that's bound to cause no end of nail biting. 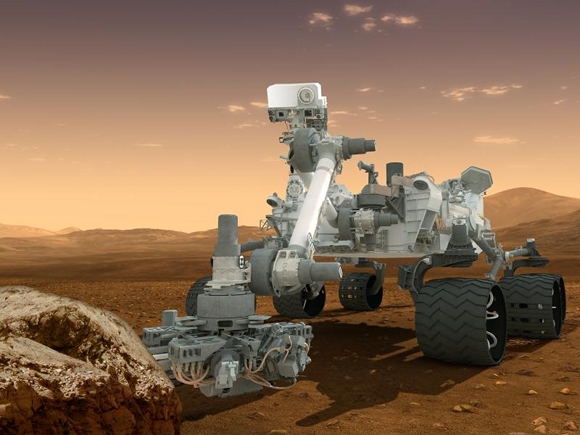 Star trucking, across the universe!

To add even more zest to the proceedings, NASA decided to reduce the landing zone for Curiosity, moving it closer to the very reassuringly-named Mount Sharp to cut down on time spent trundling across the surface. The previous landing zone for a rover was about 19km by 26km (11.8 miles x 16 miles). The new mountain-adjacent zone is just 6.4km by 19km (3.9 miles x 11.8 miles).

Which is why testing everything a few times before touchdown at 6.31am BST on Monday (10.31pm PDT Sunday) just might be a good idea.

The Mars Science Laboratory is busy turning on needed components and deciding upon final parameters (although these can be updated during the landing if need be). Onboard is the Entry, Descent and Landing Instrument Suite, which will record every detail of the plunge to help make future missions easier.

Once it reaches the surface, Curiosity is expected to wander about for one Martian year (98 Earth weeks), though previous rovers have lasted much longer than their initial mission's duration.

As well as trying to find evidence of microscopic life, the rover will also help scientists work out how to best set up home on the unforgiving planet: the space-truck is equipped with a weather station, an instrument for monitoring high-energy radiation and an instrument that can detect soil moisture and water-containing minerals in the the ground. All of which is scientifically valuable in a number of ways, but can also help plan for an eventual manned mission to Mars.

And if there's any life around that Curiosity doesn't like, it's always got its laser gun and robotic arm handy. ®