Pen is to be used, not fingers

You'd never have guessed this, but Lenovo will be shipping a ThinkPad-branded tablet running Windows 8 when Microsoft's next major OS release comes out. Still, we do no have details.

According to a leaked presentation, Lenovo reckons the 10.1in beast is a clear iPad killer: it has NFC; HDMI, SD and USB portage; two mics rather than one; two speakers rather than one; cameras with more megapixels; and an "accurate pressure-sensitive pen".

It's not sure about the ThinkPad's ability to run "Tablet + PC apps" when the iPad can only do "Tablet Apps", but neither does it count that as a draw. 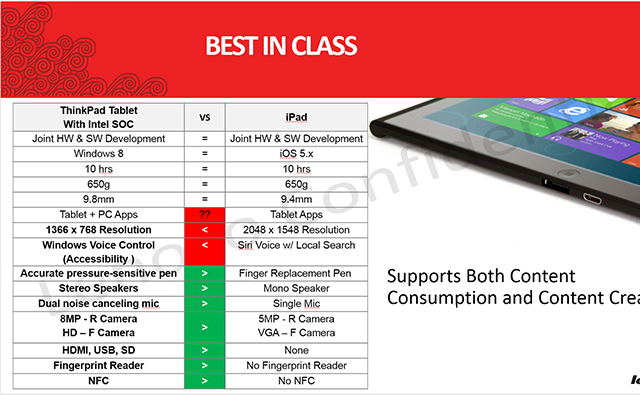 The blurb, emailed to Aussie site Tech In 5, reveals the ThinkPad also has a fingerprint sensor, 64GB of Flash storage, and an Intel 'Cloverview' Atom chip, which Chipzilla announced in April, backed by 2GB of DDR 2 memory.

It'll weigh in at 650g and offer ten hours' runtime. It's fractionally thicker than the iPad. ®