Taxpayers should cough to get one's country place online

Analysis A House of Lords committee this week declared that British taxpayers must foot the bill for an internet that nobody wants - unless perhaps they have a second home in the country.

You may have caught the highlights of this report yesterday, and some observations are accurate: Britain's broadband is slower than its rivals. But this doesn't seem to be what vexes our noble and learned friends. Observations don't amount to a rational argument - and the Lords are making a very radical proposal. Huge and open-ended taxpayer funding must be committed, they argue, to build a national utility. One that will largely be used by sheep.

As every one knows, the nation's finances are in a dire state. The national debt is increasing. So what's the economic argument for new public spending? The peers won't say: their report almost completely avoids making the economic case. To our knowledge, no study, public or private, has ever shown any benefit to UK plc from expenditure on rural broadband infrastructure. The committee has a glimmer of understanding how much this will be - citing a four year old Broadband Stakeholder Group study estimating the cost of building fibre to the home to every home as £28bn.

We say 'almost completely', because a figure for economic benefit is mentioned - it's just doesn't support the argument. The Committee says this:

Studies undertaken by McKinsey, Allen, OECD and the World Bank [showing] that a 10% increase in broadband penetration results in a 1% increase in the rate of growth of GDP.

The source is Arqiva, coincidentally one of the companies first in line for handouts, and is a little misleading. What McKinsey actually states in its 2009 survey (“Mobile Broadband for the Masses” (2009) ) is this: "a 10% increase in broadband household penetration delivers a boost to a country’s GDP that ranges from 0.1 percent to 1.4 percent."

We know the relationship isn't linear, and isn't even necessarily causal. Infrastructure spending where there's no internet at all can bring economic benefits. But by the time you get to 90 per cent penetration and above, it's not the same game any more. Benefits from internet investment typically accrue to the provider, and of course, pirate websites operating in foreign countries. But in remote areas there are too few potential users to make the investment worthwhile.

and no wonder. It's received

can get on the internet

Instead of making an economic case, the Lords attempt to deploy several moral arguments to justify the spending:

"Reaching the remainder, however, as the 'final third' of the population, requires Government support or a socially corrosive digital divide will follow," they claim. Corrosive? Really?

The Lords report is also contains guff like this:

"...a future where appliances in our homes and at work, like fridges and desktops, are connected and enabled as interactive multimedia devices, and far more beyond, bringing benefits to society."

There is certainly a case for the state spending money to protect its citizens more efficiently than they can themselves. In theory, national armed services should be more efficient than people clubbing together ad-hoc to operate their own. There may also be a case for spending money out of general taxation to guarantee some level of health and welfare. These are all moral arguments. The moral case for a table that plays Hollywood movies, or a fridge that accesses Betfair.com is not clear: these are really luxuries.

Rural broadband is not a market failure, it represents the contours of a successful market. Just as not everybody wants a power shower, not everybody wants the internet. The Lords insist they need it, which prevents them from confronting reality. What the Lords Committee failed to recognise or tackle is that refuseniks might not consider the internet attractive, and have very good reasons for doing so.

This leads the Lordships into some strange cul-de-sacs.

For example, the report cites an observation from a witness that "most people watch their televisions in fixed locations from fixed sets. Actually, spectrum's great wonder is its ability for mobility". The Lords then make this leap: "As such, it might be argued that spectrum's current use for fixed, broadcast purposes is wasteful."

On this basis, they recommend that the spectrum used for PSB (public service broadcasting) instead be given to mobile internet providers, so that we could watch TV using an extremely expensive and inefficient infrastructure. In other words, a public resource which is used, very effectively, to provide something people want, should be turned over to do be used for something very inefficient, that people don't want.

Why? The answer is the same as all the others offered by the Communications Committee: it's the internet. This is indistinguishable from religious zealotry.

Given this ideological approach, the Lords completely ignore the effects of subsidies on the market so far. This is a question on which the taxpayer is entitled to some answers, whether the money is spent directly by the Government or funnelled through Europe.

It would appear that a lot of private rural broadband activity has seized up, as large companies - knowing that subsidies are an offer - await the sweeteners. Why spend capital on something now, when you can be paid to do it in twelve months time?

But this is not addressed. 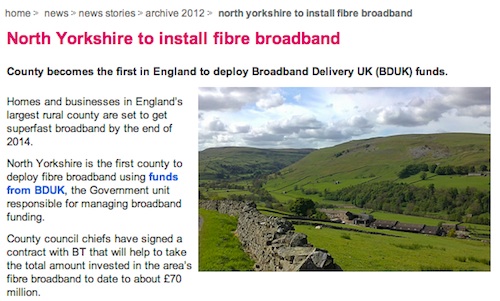 Earlier this summer, MP Graham Jones threw down a very interesting observation in the House of Commons. He noted that Lancashire County Council was spending £32m on super fast rural broadband. "The reality is," said Jones, "much of Lancashire's rural hinterland is a playground for the wealthy."

"Not only do the demographics suggest that upgrading from broadband to superfast broadband will not bring jobs, the geography does too. It's fine for new businesses that are media intensive, have no product to shift and don't meet clients, but the question is, how many will fit that category?"

In other words, splashing cash at rural internet infrastructure merely benefits the wealthy.

Here, we must banish the cynical thought that members of the House of Lords are likely to have at least one - possibly more than one - part-time home in a rural area.

Do sheep really need Twitter? And must we pay for their Tweets? Let me know. ®

@AndrewOrlowski welcomes your emails and Tweets. Use the hashtag #sheepneedtwitter