Don't write off Apple's competitors in the tablet market just yet. While the iPad may have regained much of the strong lead it lost to Android slabs during 2011, its rivals were showing the strongest growth in Q2 2012.

According to new numbers from market watcher IDC, Apple remains the number one tablet supplier, having shipped more than 17m machines during the quarter - out of 25m in total. That's up from just under 9.3m in Q2 2012, a growth rate of 84.3 per cent year on year.

With 68.2 per cent of the global market in its hands, Apple's lead is undeniable: the closest individual vendor is - no prize for guessing - Samsung with a share of just 9.6 per cent.

Samsung's shipments grew 117.6 per cent year on year, a fatser rate than Apple's. Asus' shipments grew almost as quickly: 115.5 per cent, but with a share of just 3.4 per cent, it still has a long way to go to reach Apple.

The wildcard is Amazon. Its Kindle Fire wasn't available in Q2 2011, but a year on the online retailer shipped almost 1.3m of them, enough to give it five per cent of the world tablet market - not bad, perhaps, for a machine only available in one, albeit big country. 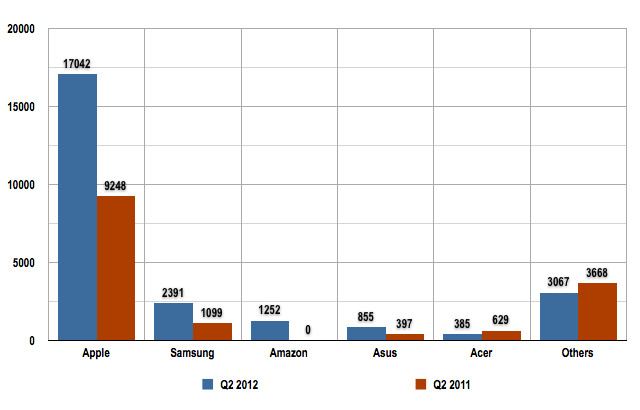 Acer's share slumped to 1.5 per cent, with shipments falling 38.7 per cent year on year to 385,000 units. That was still sufficient to keep it out of the 'Others' category, which declined 16.4 per cent in terms of shipments.

That brand may be Windows 8 or it may not. But you can be sure Acer and those companies with an even lower market share will be crossing their fingers that it is. But with Windows 8 not out until the tail end of October - and with Microsoft's own tablet series, Surface, going on sale at the same time, they'll have to face not only what Apple comes up with in the meantime but also Google's now-shipping Nexus 7 and products from their chief OS supplier. ®