Last weekend, we finally got LOHAN to breathe fire when we successfully fired a solid rocket motor at an simulated altitude of 76,500ft (23,300m).

Or rather, ignition was achieved at an estimated 20mbar, because as soon as the custom igniter popped, we shut off the isolation valve between the chamber and vacuum pump to prevent overpressure damage to said pump and the very expensive pressure gauge kindly lent to us by Applied Vacuum Engineering.

Here's our video of the test, which prompted to readers to stroke their beards in contemplation while mulling LOHAN's vacuity:

Is the vacuum maintained during the delay between the igniter firing and the motor burn? The smolder could slowly reduce the vacuum to the point where the motor burns properly, which won't happen at altitude and could lead to an in-flight failure.

David Given had a similar concern, chipping in with:

Looks like the fuse is generating quite a lot of gas, judging by the buildup on the inside of the perspex lid.

I am curious if the low pressure in the vessel was maintained after the initial firing of the igniter, before the engine fired. The igniter carries a significant amount of oxidizer which enables it to burn in an oxygen-poor environment (like a vacuum). But this also means that when it fires, it releases a lot of gas, which would reduce your vacuum pressure. So while the igniter might burn, it still might not indicate whether the engine would fire at low pressure. The pressure might not be as low as you expect, at actual ignition time.

Well, we know that the REHAB chamber will hold a decent vacuum even after it's isolated from the pump, but it's a perfectly reasonable question as to whether igniter emissions are raising the pressure.

The answer is: we don't know. However, note that two attempts to kick start an AeroTech RC 32/60-100NS with the same igniter ended in failure.

Significantly, here's the result of our second AeroTech blast: 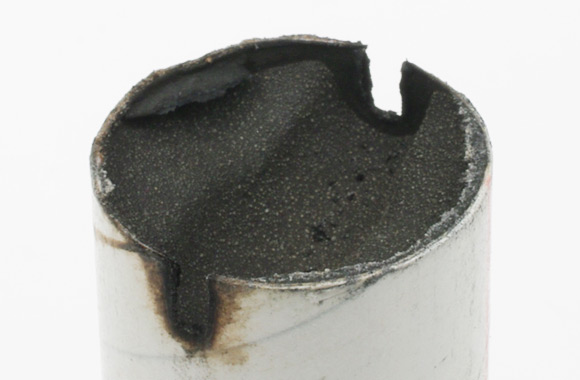 The reload clearly ignited, and then just fizzled out. We'd suggest the lack of pressure is the issue, which in turn indicates the chamber held the vacuum pretty well, even during igniter burn.

While we were scratching our heads, Kenneth G Holloway offered:

I watched your REHAB test today with extreme interest. As per some of the other comments regarding the pressure inside the REHAB chamber I question the ability to maintain a high vacuum after the igniter fired. Both the Aerotech and Cessaroni motors use Ammonium Perchlorate Composite Propellant (APCP) which has a positive coefficient of burning with respect to pressure. In other words the higher the pressure inside the motor the faster the propellant burns.

This would explain both the failure of the Aerotech motor to remain lit and the long delay between igniter activation and the full power burn of the Cessaroni reload. The Aerotech apparently burned, but not fast enough to bring the pressure inside the casing up to normal operating pressure before the heat leached away into the motor's casing. The Cessaroni motor on the other hand uses a thick plastic, instead of a cardboard, liner so the heat was retained until the pressure in the chamber increased enough for the motor to start operating at normal internal pressure.

Kenneth reckoned the solution to the motor internal pressure issue is a burst diaphragm, viz:

A simple disk of copper or aluminum made from 0.002" shim stock, with a hole just large enough for the igniter, could be added to the Aerotech motor between the nozzle and the propellant grain for example.

You could also experiment with a smaller nozzle on the Aerotech motor. I would contact Aerotech and ask Gary Rosenfield if you could obtain a number of un-drilled nozzles for the 32/60 reload casing. I'd start by reducing the nozzle's exit area by about 50% and then proceed based upon tests in REHAB.

Regarding the burst diaphragm, our thinking is that wouldn't simply sealing the igniter into the nozzle with, say, a sacrificial soft silicone seal do the same job?

The nozzle suggestion is sound, though. Regular contributor imanidiot entered the fray with:

A different nozzle design might be needed. I would suggest to the LOHAN team to contact the university lads and see if they have someone that knows how to do transsonic and possibly hypersonic gas-flow analysis and make some "back of a floppydisk" FEM calculations to see if changing the nozzle and throat design is needed.

Rocket engines are designed to work for a certain pressure differential between the chamber and the exit. While the exit pressure is tiny compared to the chamber pressure, and chamber pressure is preferably a constant, it does affect the expansion of the exhaust gasses in the nozzle. A different nozzle design can improve trust, cooling and engine stability when working in a vacuum over one designed for working at sealevel to moderate altitude. (The "big boys" engines usually also come in atmosphere and vacuum application flavours, with slight variations in throat and nozzle design to keep optimum gas flow)

Rewinding to the chamber vacuum situation, Kenneth suggested a large pressure tank between chamber and pump to "maintain the low pressure inside the chamber once the pump is isolated".

VeganVegan had a different line of attack:

The alternative, once you have dry ice available, is to use a cold trap: put a small, copper or metal vessel or coil between the vacuum pump and the REHAB chamber, and chill down the vessel with dry ice plus a bit of ethanol added to the dry ice to improve thermal transfer (what to do with the surplus ethanol?!). Most of the products of the igniter should condense out well above the -72C temperature of the cold trap. You can now keep the pump running throughout the ignition and burn sequence. If you are paranoid about any residues making its way through into the vacuum pump, a quick oil change will take care of it. Also, it is a good idea to clean out the cold trap between runs.

Hmmmm. Even with that set-up, we'd still worried about the possible terminal destruction of our pressure gauge. We have to balance the desire to demonstrably show a 20mbar vacuum up to the point of motor ignition, and the need to keep the REHAB rig up and running for the full range of tests, without risking expensive and irreplaceable (=we have no cash for replacements) parts.

It looks like more mulling and beer mat sketches are on the cards, then. LOHAN is proving very challenging in the motor department, but of course it really is rocket science.

Thanks as ever for all your input, which is proving invaluable as we creep ever closer to the stratosphere. ®