IT job creation bucks up US economy

The US economy added more jobs than economists had been expecting in July, according to a report released Friday from the Department of Labor, and the IT sector did its part to push up the numbers once again as it has since the beginning of the Great Recession five years ago.

According to the July jobs report (PDF), the private sector (not including farm workers or government employees) added 172,000 workers in July, a relatively big bounce after months of meager job gains. Local, state, and federal governments continued to shed workers, down 9,000 in the quarter by the math of the Bureau of Labor Statistics. The BLS compiles worker rolls at businesses every month to see the ups and downs by industry as well as doing a survey of American households to calculate the unemployment rate. the July numbers indicate the net number of workers added to the nation's payrolls rose by 163,000.

However, it will take a lot more than this to knock down the unemployment rate, and a little bit more to just keep pace with population growth in the US. Economists say that given the current population level and growth rate, the US economy should be adding something on the order of 200,000 jobs a month just to absorb new workers as they enter the labor force. And to knock down the number of unemployed people, which stands at 12.8 million, and therefore the official unemployment rate, the economy would have to add two, three, or four times that many workers over a long period of time. At the rate of job growth in July, it would take about 3.5 years to get the unemployment rate back down to the 4.5 per cent level of structural unemployment that persisted ahead of the Great Recession. And you would have to add those 200,000 jobs per month on top of that to keep up with population growth. 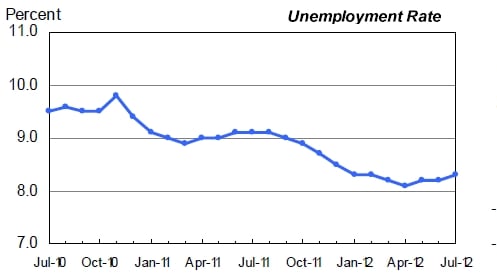 Unemployment rate in the US over time

Back in December 2007, when the Great Recession officially started, the unemployment rate was 5 per cent and there were 7.6 million workers looking for jobs. That unemployment remains high does not paint a pretty picture, particularly for the Obama Administration, which is trying to keep its job in November when the election comes around.

The way the math worked out this time in the July 2012 report, the worker pool shrank a bit in – meaning people stopped looking for work and are therefore not officially counted as being unemployed – and therefore the unemployment rate ticked up a bit to 8.3 per cent. While this is better than 10 per cent unemployment, as the economy in the States was wrestling with in late 2009, it is still an unacceptably high share of workers thrown out of jobs and one that will probably persist until the European zone fixes its issues and the United States sorts out its own. In other words, maybe this is the new reality and maybe structural unemployment is at a new – and higher – permanent level.

If you add in those who are working part time and those only "marginally attached to the labor force," as the BLS puts it, then the unemployment rate (meaning those who cannot find full-time work but who want it) is running 15.2 per cent right now. 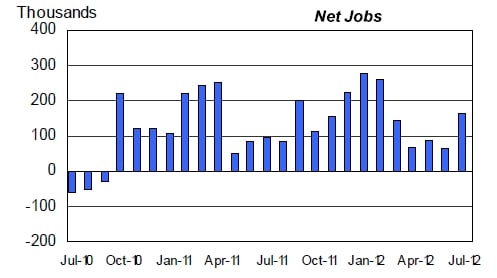 As in months past, manufacturers, healthcare providers, and companies engaged in professional and business services of various kinds were the big drivers in job growth. Manufacturers added 25,000 workers last month, with the auto industry and its parts suppliers leading the way and having far fewer layoffs than is typical in the summer months. Healthcare companies of all stripes added 12,000 net new workers last month, and professional and business services firms added 49,000 employees.

You can't actually figure out what jobs are coming and going each quarter because the BLS doesn't track jobs by type but rather by industry. But El Reg drills into the IT-related industries, using the raw and not seasonally adjusted data, each month to come up with a proxy for IT job growth or shrinkage.

Professional and business services was the big job creator during the recovery in the United States, and continues to drive jobs. The sub-sector comprised of companies that are engaged in computer systems design and related services added a very helpful 12,300 workers in July, pushing the pool of workers up to 1.61 million. Those companies peddling management and technical consulting services, which often have an IT component, added 8,800 people in July, to reach 1.15 million total workers across the country.

Headhunter Challenger, Gray & Christmas not only watches the monthly BLS report very closely, but tracks officially announced job cuts in the United States through filings that are required by many states if job cuts reach a certain threshold. Through the end of July, employers in the US have officially announced 319,946 job cuts, according to a report put out by the headhunter last Friday. The computer industry – which includes computer and electronics makers and telecom companies according to Challenger, Gray & Christmas – has officially given out 35,006 pink slips to date, more than triple the amount of a year ago, driven predominantly by the 27,000 job cuts that Hewlett-Packard said it would be making back in May. Of course, not all of those cuts will be done in the United States, so be careful with this data. ®