AMDevices is keeping the heat on rival Nvidia in the workstation graphics market with the launch of four FirePro graphics cards, topping out at 4 teraflops of floating point oomph, and two CPU-GPU hybrids based on the new "Piledriver" Opteron cores and bear the FirePro rather than the Fusion APU brand used for consumer gear.

AMD says that the new lineup of discrete graphics cards are aimed at workstation users rather than gamers, and they sport the performance that end users working from CAD/CAM, EDA, and various media and rendering applications need and sporting the prices that they are willing to pay. 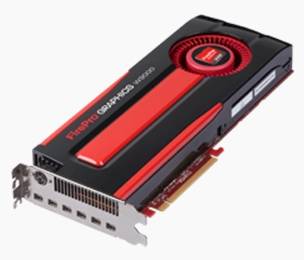 There are four new FirePro graphics cards for workstations, all of which are based on AMD's "Southern Islands" family of GPUs that are already inside the top-end Radeon lineup for gamers and consumers. These are fabbed by Taiwan Semiconductor Manufacturing Corp using its popular and slowly ramping 28 nanometer process.

All of the new FirePro cards plug into similarly shiny PCI-Express 3.0 x16 slots that made their debut earlier this year in workstations and servers using Intel's Xeon E3-1200 v2, E5-2400, and E5-2600 processors. No other CPUs support PCI-Express 3.0 slots yet, but presumably AMD will get the lead out and add PCI-Express 3.0 support to the next iterations of its chips.

With the "Tahiti" GPU that is part of the Southern Islands family, AMD has put the single-precision floating point operations pedal to the metal, cranking up to just under 4 teraflops and offering nearly 1 teraflops of double-precision oomph. This top-end card has a 384-bit memory interface and delivers 264GB/sec of bandwidth across its 6GB of GDDR5 main memory.

AMD is pitching this card against Nvidia's Quadro 6000 card, which also has a 384-bit memory interface but only 144GB/sec of memory bandwidth across its 6GB of graphics memory. Because it is based on the earlier "Fermi" GPU from Nvidia (and one with only 448 of its 512 cores activated) it only delivers 1.03 teraflops single precision and 515.2 gigaflops double precision. Even the new Quadro K5000 graphics card, which has 1,536 cores in the Kepler GPU, only cranks out 2.1 teraflops at single precision and only 173GB/sec across its 4GB of GDDR5 graphics memory.

The good news for AMD is that the new FirePro W9000 and W8000 graphics cards sport error correction on the GDDR5 memory, something that Nvidia has supported for years in the Fermi GPUs and that AMD needed for its own GPUs if it hopes to revive the FireStream GPU coprocessor biz or pitch FirePro cards against Nvidia Tesla GPU coprocessors in supercomputers. 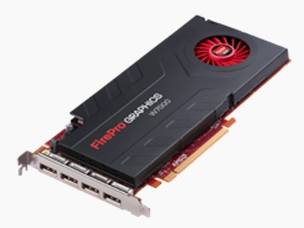 The W9000 can drive up to six displays and costs a rather steep $3,999, or a buck per megaflops single precision if you want to look at it that way, or just a little over four bucks double precision megaflops if that is more important to your workloads. For plenty of applications, particularly in signal processing, seismic processing, life sciences, and media, things are done in single precision so this is the important thing.

The W8000 has 19 per cent less SP and DP oomph, as well as 33 per cent less memory at 4GB, and its memory interface is only 256 bits wide and only delivers 176GB/sec of bandwidth. But it only costs $1,599 and when you do the math, it delivers twice the bang for the buck on both raw SP and DP operations than the W9000 it sits underneath in the product line. AMD is selling the W8000 against the Nvidia Quadro 5000, which is rated at 718 gigaflops SP and 359 gigaflops DP.

The W7000 has fewer cores running at slower clock speeds on the Southern Islands GPU, and therefore only delivers 2.4 teraflops SP and a mere 152 gigaflops DP, but again, it only costs $899. That's a bit cheaper for single-precision math than the W8000 – about 24 per cent less dough per flops – but if you need any double-precision math, the W7000 is not for you. The W7000 is targeted at customers who might otherwise buy an Nvidia Quadro 4000. 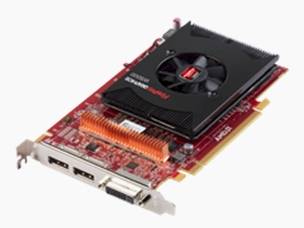 If your needs or budget are even more modest, then you can always opt for the FirePro W5000, which is basically a W7000 cut in half on performance and memory capacity but with only a third of the price chopped off.

Once you are eating a slot and using company funds to buy a workstation, El Reg's advice is to spend the extra $300 on the better graphics card and ditch Microsoft Office for OpenOffice. You'll be happier. The FirePro W5000 is aimed at Nvidia's Quadro 2000 series, and its bang for the buck is actually a little bit worse than the W8000 and not nearly as good as the W7000.

The Piledriver cores are making their first appearance in the FirePro A300 series of ceepie-geepies that are a derivative of the "Trinity" family of desktop and workstation accelerated processing units, or APUs in AMDspeak.

Here's the thing. If your GPU is on the same die as the CPU, then it really doesn't matter if your machine supports PCI-Express 3.0 peripheral slots or not. That's the whole point of Fusion APUs for desktops and laptops and now FirePro APUs for workstations. Of course, you can't cram a top-end multicore processor and a full-on GPU into a single socket, so APUs are not for everyone.

AMD is putting out two FirePro A300 series APUs for workstations. The top-end part is the FirePro A320, which has a thermal design point of 100 watts and which has four Piledriver cores that run at 3.8GHz with a Turbo Core speed of 4.2GHz; they have 4MB of shared L2 cache memory. The GPU side of the chip has 384 Stream processors running at 800MHz. That GPU is rated at 184 gigaflops DP and 736 gigaflops SP.

The FirePro A300 also has four Piledriver cores, which run at 3.4GHz with a Turbo Core boost to 4GHz. The 384 Stream processors in the GPU portion of the chip run at a slower 760MHz, and the combined APU has a thermal rating of 65 watts. The GPU on the FirePro A300 is rated at 173 gigaflops DP and 693 gigaflops SP. 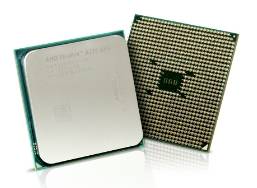 Die shot of the FirePro A300 CPU-GPU hybrid

The FirePro A300 and A320 support a maximum of 32GB of main memory (presumably across four DDR3 memory slots) and can drive monitors with a maximum resolution of 4094x2160. For either FirePro APU, you can allocate up to 4GB of main memory on the system to be used as graphics memory or a frame buffer for video, and you can run DDR3 memory as fast as 1.87GHz. The FirePro A320 has its CPU and GPU clocks unlocked, but the A300's are battened down so you can't overclock them.

Both FirePro APUs can drive as many as three displays, and they are aimed at 2D and entry 3D workstation users. Microsoft's Windows XP and Windows 7 operating systems can run atop these APUs, and so can SUSE Linux's Enterprise Desktop 11 and Canonical's Ubuntu Desktop 11.04 and 11.10 releases.

AMD did not announce pricing on these FirePro APUs, since they only go through the channel, but said that workstation partners would get these Trinity derivatives into the field beginning this month. These chips are aimed squarely at Intel's quad-core "Ivy Bridge" Xeon E3-1200 v2 processors, which sport internal HD Graphics P4000 GPUs. ®