Scientist the Soviets tried to kill was 98

Sir Bernard Lovell - the brilliant British physicist whose inventions observed cosmic rays and ended up on the front lines of the Cold War - has died at the age of 98.

Bristol-born Sir Bernard is best-known for establishing the University of Manchester's Jodrell Bank Observatory, whose Lovell radio telescope was used to conduct pioneering research into rays of charged subatomic particles from outer space. 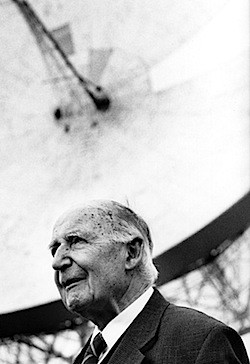 The telescope remains one of the most capable of its kind in the world nearly six decades after it was built in 1957. It is the third-biggest steerable radio telescope on the planet, standing 89m high with a bowl 76.2m in diameter, and is used to research pulsar-grade stars and test Einstein’s General Theory of Relativity.

It was constructed after Sir Bernard, who had studied astrophysics before the outbreak of the Second World War, lashed together radar systems left over from the conflict to examine electromagnetic radiation from space.

But although his telescope was designed to investigate cosmic rays, it played a role in the ensuing Cold War: the observatory was used to track the launch of Russia's Sputnik satellite and provide early warning of a missile attack from the cold communist state.

That led to an assassination attempt on the academic during a trip behind the Iron Curtain. Sir Bernard said he had been ill for a month following one visit to Russia in 1963, where he believes he was