Google has told El Reg that the video allegedly showing a crashed Street View spymobile in northern India is a hoax. 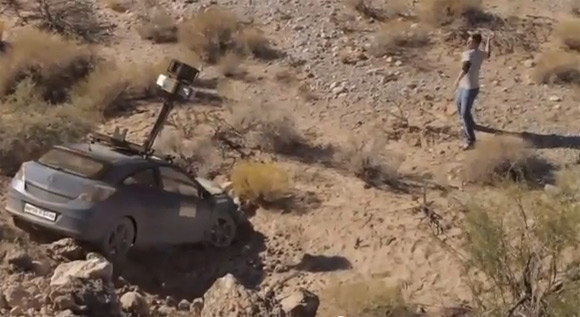 As we reported yesterday, the 22-second vid shows what appears to be a pranged Great Satan of Mountain View black Opel, with someone rather unkindly pelting it with rocks.

Since the video hit YouTube last Friday, conspiracy theorists have been falling over themselves to insist the footage is fake. Apparently genuine snaps of the crash site, by one Pit Keller, have likewise failed to convince the black helicopter brigade.

A Google spokesperson told us yesterday: "Thanks for getting in touch about this, and I can confirm that this crash is a hoax, as the car in the video is not a Google Street View car."

That didn't fully satisfy us, so we threw Google another email asking if Street View operatives had been prowling this part of India. If not, we reasoned, then the only explanation was that someone "hijacked one of your vehicles, took it to Area 51 in Nevada and faked the Indian desert".

Google hasn't as yet replied, and keeping a similar silence is Gisela Treichler, who uploaded the video. The YouTube blurb explains the spymobile was "discovered by one of my clients", and she handily provides a link to her travel bookshop, whose url can been seen in another crash site photo.

We emailed Treichler asking if she was familiar with Area 51. We're still waiting for an answer.

So, are we looking at a Moon landing style photographic conspiracy, designed to get some cheap publicity for Swiss bookmongers, or a sinister Google covert Indian black op? You decide... ®