It's a two-horse race, no question. Apple and Google's grip on the world smartphone market tightened even further during Q2, with everyone else's combined share falling to 15 per cent from 34.3 per cent in the year-ago quarter.

Microsoft's Windows Phone platform has undoubtedly increased Redmond's presence in the market, but by a tiny amount: a 2.3 per cent share became 3.5 per cent in the months between Q2 2011 and Q2 2012. But it's clearly gaining on RIM, so there's scope for optimism at Microsoft. Question is, is it actively winning share - or is RIM simply losing it? 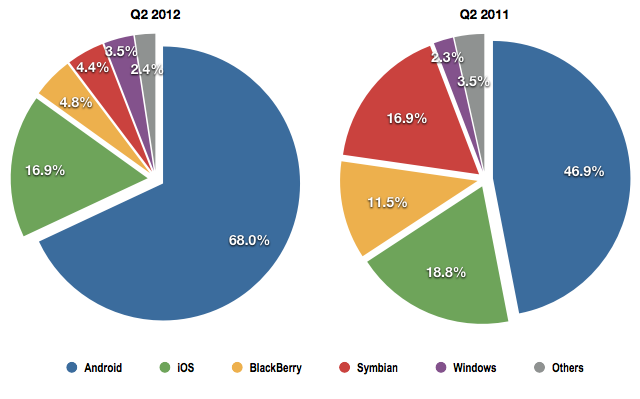 Microsoft, like Google, is merely an OS supplier - their shares are spread across multiple vendors. Not so Apple which, like RIM and Symbian, saw its market share fall year on year. Unlike those others, Apple nonetheless increased its unit shipments, and since it's shipping units and selling them that makes money, we'd say it's a lot more cheerful than RIM and Nokia, Symbian's owner, are.

Apple can also take heart from increasing its market share in the US, its home market, according to recent figures from Strategy Analytics. But IDC's data show the value of enabling low-cost product in other markets, particularly emerging ones. The rise of the budget Android smartphone is clearly playing dividends for Google.