When Intel launched the SSD 520 series of drives it caused quite a kerfuffle. The company had abandoned using one of its own controllers or even a Marvell controller, as found in the 510 series. Instead, the ubiquitous LSI Sandforce SF-2281 controller was utilised but with Intel’s own hand firmly in charge of the firmware. 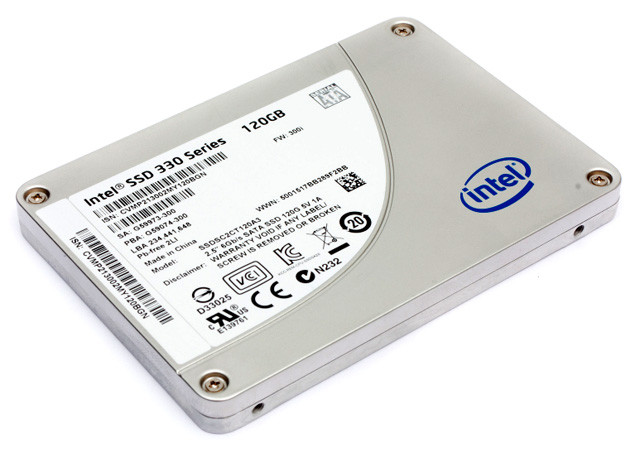 SandForce be with you: Intel's SSD 330

So with the 520 SSD aimed at the performance/enthusiast market segment, Intel has taken a fresh look at the mainstream consumer market occupied by its 300 series drives. Here, Intel has once again chosen the well-worn LSI SandForce route – the previous 320 series used Intel’s own X25-M G3 controller – with the 330 adoptiing the same SF-2281 controller as its bigger sibling.

At present the largest capacity 330 series SSD is the recently introduced 240GB model, the others being 60GB, 120GB and 180GB. These versions were available at launch all with quoted Sequential Read performance of 500MB/s with Sequential Write speeds of 450MB/s bar the 60GB (400MB/s) drive. The limited range of capacities is in stark contrast to the previous 320 series, which offered 40GB all the way up to 600GB.

Oddly, Intel has used a 9.5mm format for the drive, which rules out fitting it as a replacement drive in the thinnest notebooks and Ultrabooks, which you would have thought the ideal placement for it. 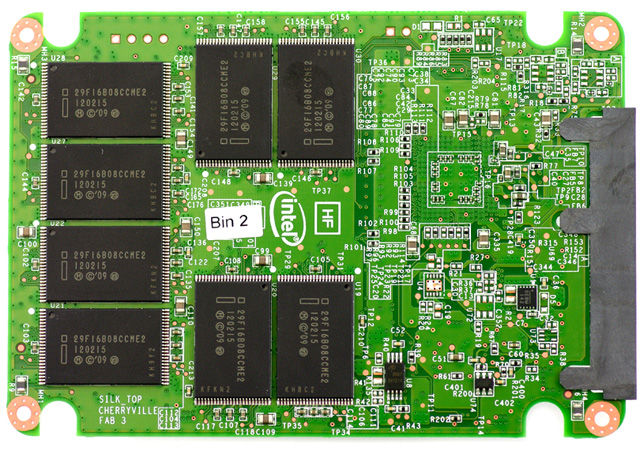 Unlike the majority of other manufactures offering lower cost drives, Intel hasn’t taken the cheaper option of using asynchronous NAND. Instead, the 330 uses synchronous MLC NAND, just as the 520 does. Indeed, Intel has the enviable position of being able to hand pick the best chips to use for whichever purpose from its own NAND fab. In fact, the 330 uses the same 25nm Intel 29F16B08CCME2 NAND as the 520 and, upon opening the drive, the layout between the two PCB’s is identical, with the exception of a little sticker on the 330 which says Bin 2.

The Intel 330 has a three year warranty, instead of the five years you get with 520 SSD. It would appear that Intel is using the cheaper 3K Program/Erase cycle version of the NAND in the 330, rather than the 5K P/E found in the 520. With a shorter warranty and a lower price tag, Intel is marketing the 330 SSD in much the same way as Kingston has done with its 3K HyperX range, compared to the original HyperX model. 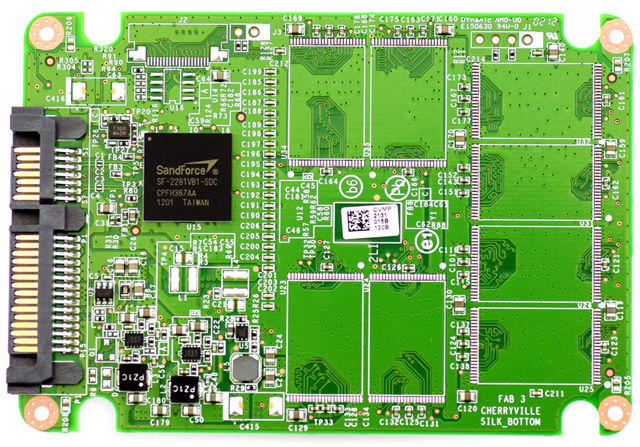 ...and the other side is home to the SandForce controller

The review sample I have here is an Intel 330 SSD 120GB (SSDSC2CT120A3K5). It features eight 16GB NAND chips to provide its storage capacity with all sitting on one side of the PCB, leaving the LSI SandForce SF-2281 all on its lonesome on the other side. The controller runs the 300i version of the firmware, rather than the 400i used in the 520 series.