Other physical attributes were also assessed, such as a lung capacity – bigger is better - and the ability of to rapidly transfer oxygen to the muscles. This is known as VO2 Max.

Closely connected to VO2 Max is the research of Claude Bouchard, who looked at the influence of genetics on athletes’ responses to training in 2011. Genetics, after all, influence factors such as height, muscle mass and so on. Having tested hundreds of previously untrained volunteers over a period of five months, it was noted that some had improved their VO2 Max score by less than 5 per cent while others improved by 30 per cent. Bouchard's work identified certain genetic factors responsible for the different results.

You can assess your own suitability to specific sports using Oakley’s Olympisize Me test here.

What this means is that it’s probably unlikely somebody straight off the street would make the cut for Team GB. Glover, for example, had already been physically active: playing hockey for the England satellite squad, captaining her county team and also playing tennis and swimming for her county at 14. After being selected to run for England, Helen studied sport and exercise science at the University of Wales. 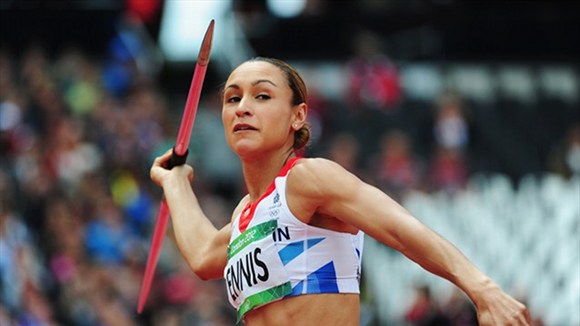 Behind the body, the mind: Jessica Ennis had the mental strength to pull back from earlier injury to strike gold in London.
Pic credit: London 2012

The mental part is easily overlooked when you see the kind of buff and ripped physiques on display in the Olympic Stadium where, on Saturday, two British athletes struck gold having suffered major physical setbacks earlier in their careers.

Jessica Ennis broke her right ankle in time for Beijing 2008 and was warned she might never run competitively again. However, she was determined enough to change her technique and training. Long-jumper Greg Rutherford missed out on competitions through 2007 and was ruled out of the 2010 European Championships thanks to different injuries. He has since adapted his running and jump style to be more like four-times medalist Carl Lewis.

It seems the days of the talented amateur training alone are disappearing, along with the idea that it's enough for teams to produce just one or two hits followed by fallow periods.

One reason for this is the need for results in an increasingly tough competitive world.

Bolt’s cruise to victory in the 100 metres on Sunday is proof of just how tight the margins are and of the need for more precise and systematic selection and grooming of athletes. Bolt won on 9.63 seconds compared to 9.69 four years ago in Beijing. But his competitors were also faster than before: four of those racing against Bolt were faster than the runner who came second against Bolt in Beijing.

The pressure for precious metal is particularly acute for nations hosting the Olympics, Oakley reckons, and this means that there is more focus on training and more funding of sports programmes in the run-up to the Games in the host countries. UK Sport, founded in 1997, spends £100m per year in national lottery and taxpayers’ money to develop athletes in what it calls “high performance” sport.

Every country, except the USA in 1996, has increased its medal tally by a “huge amount”, Oakley says, by spending more on sport.

So much for the nebulous "home advantage" phrase that's been bandied about this week. The effects of money and investment are easier to gauge.

“Whenever you host your own Games, people talk about home advantage. There’s lot of examples where you can see home advantage, but there’s also the political impetus and momentum where you cannot afford to fail at your own games so lots of money an effort get spent on it in before hand,” Oakley says.

As Team GB hit parity with Beijing on Tuesday thoughts are now slowly turning to the next Olympic games in Rio, and how we can stop being overtaken by the rest of the world. In the gladiatorial din of the velodrome, especially, we saw off renowned cycling nations such as Australia, Germany and France. But they will learn and adapt. Britain so far has nine medals in cycling – seven gold – with second-place Australia a long way behind on one five medals and just one gold. But you can bet they will be back.

Britain will need to have more systems in place to find, fund and train even more great athletes before we run up against the rest of the world in South America.

Already the debate has begun about school sporting facilities.

But what about the role of UK Sport – what does it have up its sleeve for the next Games? So far, the authority is keeping quiet. Of all the programmes that brought those 11 outsiders to Team GB in 2012, just one is currently running: Power2Podium.

Asked if more programmes like Sporting Giants are planned, a spokesperson diplomatically told The Reg: “[We will] continue to look at front line campaigns/programmes wherever we can, identify where there is a clear performance-driven reason for delivering them, working with sports to improve their talent identification and verification processes.”