CDE was developed about 20 years ago as a unified desktop environment for all the various forms of commercial, proprietary Unix that dominated the workstation market back then: IBM's AIX, Digital’s Tru64, HP's HP-UX, Sun's Solaris, Silicon Graphics' IRIX and on x86 hardware, SCO's UnixWare. DEC even ported it to OpenVMS, which isn't a Unix at all, and in Linux's youth there was an $80 commercial version for Red Hat Linux 4. 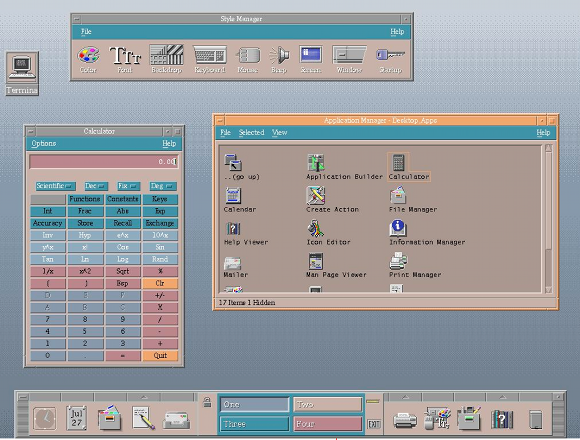 It gradually sank into obscurity as the x86 PC displaced RISC workstations and Linux replaced the various expensive flavours of Unix, but it never entirely went away. Some people loved it: there’s an open-source effort to recreate it, OpenCDE, and the increasingly popular XFCE desktop started out as a CDE-lookalike. Die-hard OS/2 users will find it familiar, too: IBM donated parts of the Workplace Shell to the CDE project, so the application launcher bears a notable resemblance to the one in Warp 3.

Today, though, thanks to years of campaigning and negotiation by Linux and RISC OS developer Peter Howkins – even including a petition – CDE's owner, the Open Group, has released the original CDE, complete with the Motif toolkit and window manager, as LGPL (GNU's Lesser General Public License) Free Software. Of CDE's underlying Motif toolkit, Howkins tells us: "It's not relicenced yet, but expect an announcement from the Open Group and ICS [the maintainers of OpenMotif] very soon."

There's a preliminary build of the current version for modern Linux, too, although as of yet it's alpha-quality – but this is not some half-finished student project. It's a tested, widely deployed, enterprise-strength product. Linux CDE is some way from being ready to download binary packages and install them with a click, but the source builds, runs and works.

Why would anyone care these days? Well, as Linux moves into new low-end territory on devices with limited storage and memory, such as the Raspberry Pi, CDE's 1990s levels of resource usage seem extremely frugal and sparing. When CDE was developed, 128MB was a lot of RAM.

And CDE isn't just a desktop: it also includes a window manager, file manager and an assortment of accessory apps such as a calculator, terminal emulator and so on. Motif was once the most widely used graphical toolkit on Unix and is still used on commercial Unix – if you watch the coverage of NASA's Mars Curiosity rover, you'll see Motif apps on some of the screens.

And of course, old-time Linux veterans might welcome a dose of nostalgia and the chance to make Linux look just like Proper UNIX™.

The project website is at CDesktopEnv.org and the source is available on Sourceforge. ®