Next: the Schrödinger's LOL-cat blog?

A group of physicists at the University of Glasgow is claiming a first: taking photos of entangled photons.

In this paper in Nature (hooray for free access!), they explain that their 201 x 201 pixel images captured around 2,500 different entangled quantum states.

The entangled photons were imaged using different lens configurations to capture correlations of position and momentum – the characteristics (to shorthand Heisenberg’s uncertainty principle) that mutually preclude excessive knowledge about a given quantum system.

From the 100,000 images taken by their setup (pictured*), the scientists say they were able to observe 2,500 states which they described as “Einstein–Podolsky–Rosen type correlations”. The “EPR” paradox is the key classical criticism against quantum entanglement, since the “state” information in entangled quanta propagates faster than the speed of light. 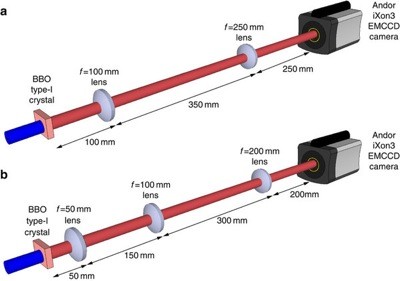 As the university’s release puts it, “by taking pictures of pairs of photons the researchers measured correlations in the photons’ positions to a degree that is not allowed according to classical physics.”