Tosh unzips 3.5incher for video, cloud, anyone with a wallet

All those photos and films need to be stored somewhere

Toshiba is rolling a line of 1TB-per-platter drives off the 3.5-inch assembly line Western Digital had to offload to get approval for its Hitachi GST acquisition.

It has three products. The DT01ACA desktop range comes with 1.5TB, 2TB and 3TB capacities and spins at 7,200rpm. They have a 6Gbit/s SATA interface, a 64MB cache and use the 4KB-per-block advanced storage format. 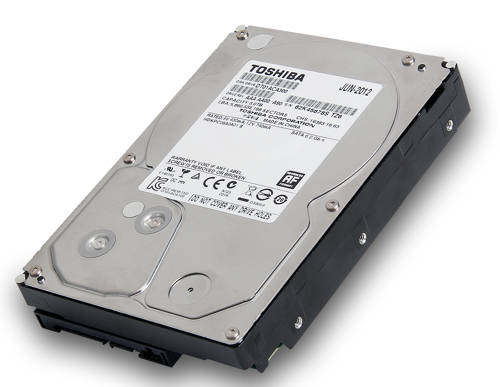 There is a set-top box and digital video recorder version of these, for optimised for video streaming, called the DT01ACAxxxV and comes with the same three capacity levels. A slowed down, literally, version of the tech is in the DT01ABA family: this includes a 5,940rpm DT01ABA300 3TB drive and the DT01ABA150 and 200 drives spinning at 5,700 and offering 1.5 and 2TB capacities respectively. These disks have a smaller 32MB cache and the same 6Gbit/s SATA interface.

Martin Larsson, a VP at Toshiba Electronics Europe, played the flash-drive-with-spinning-disk card in his canned statement: “The new DT01AxA range further cements Toshiba’s position as the only vendor to develop and supply a complete storage product line up of SSDs and 2.5-inch and 3.5-inch HDDs.”

Of course, it's easy for Tosh to lord it up over 3.5-inch drives: its rivals, such as Seagate and its 15,000rpm 3.5in Cheetah, are steadily being replaced by flash memory and 2.5-inch hard drives as users want their data faster than 3.5-inchers can deliver.

Punters' desire to fondle tablets and Intel's slim specifications for its Ultrabook notebooks are increasing overall demand for storage: holding data in a device is so passe when you can upload your stuff to a networked file server or, brace yourself, even a cloud. Big fat 3.5-inch data tubs are best-positioned to satisfy this need.

Toshiba hopes to sell its 3.5-inchers alongside its 2.5-inch drives. We may see a line of 3.5-inch Tosh external storage products. Adding a fourth platter could produce a 4TB drive and that is also a possibility. ®