Product Round-up Not everyone will agree with me that the Nexus 7 tablet is nigh on perfect but I can't imagine anyone seriously questioning its ability as a gaming machine. With a quad-core CPU and a 720p IPS screen, we're off to a good start. It's also the perfect size and weight to hold in both hands but still give your thumbs free range to activate the controls without risking cramp.

Since it landed on the doormat a few short weeks ago, I’ve been playing more games and for longer than on any Android device I’ve owned or tested. Admittedly, not all the titles are currently Nexus 7 compliant, but here are my current recommendations for some summer ‘droid gaming to keep you occupied when the rain falls.

Just because Android devices have G-sensors doesn’t mean they have to be used. Frankly, I avoid games like the plague that require I hold my device just-so to play them. Here, to move your ball through the vertical labyrinth, you use two buttons to rotate the game arena left and right about its vertical axis. For me, the result is far more satisfying than having to tilt your device.

Early levels are as simple as manure but as you advance things get tricky: you have to swap between colours (often while in freefall), dodge crushers and resort to the slow-mo option with ever greater frequency. With no zoom-out option you are never entirely sure what’s around the next corner – or over the next cliff edge to be more accurate – but then that’s half the fun. 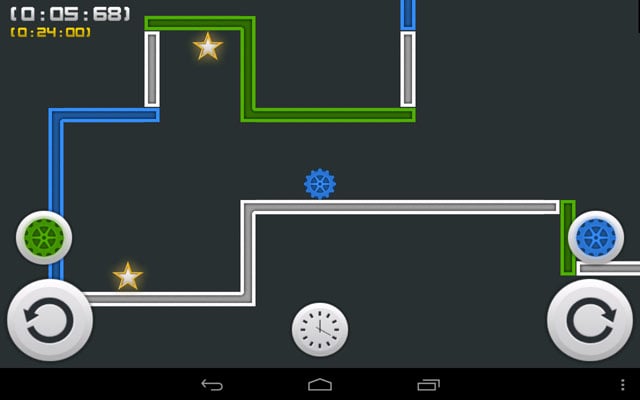 Cogs is a retro digital take on that old favourite puzzle of sliding tiles around to move a vacant square from one place to another. The difference here is that you are working with steam pipes, cogs and other steampunk odds and sods and in 3D. 3D? Yes indeed. Apply two fingers to any of the shapes and they rotate about all axes so you can see how to pipe steam from one side to drive a set of gears on the other and onto a pair of wheels on the third.

As always the real fun is in the details – moving gears to work two bell clappers is easy, doing it so the clappers strike in perfect unison is the tough part. With 50 puzzles, plus time and move restricted modes, there’s a fair amount of playtime on offer. Yet for a casual gamer, the full asking price is a bit steep. If you just want a taster, the first 10 levels are free in a demo version. After playing them, I coughed up for the full version and didn’t feel short-changed. 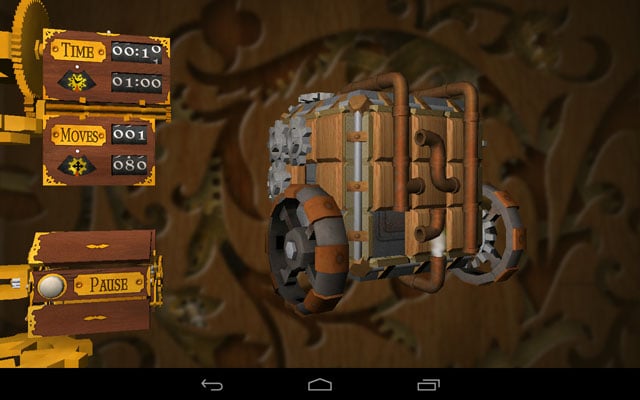