Blinkbox to sell Game of Thrones series 2 by stream

If you can't face waiting any longer for the DVD or Blu-ray release of Game of Thrones' second series, you'll be able to watch it today courtesy of Tesco IPTV service Blinkbox.

A breathless PR just called to say the Netflix and Lovefilm rival has just gained HBO's permission to sell you the series for £1.89 an episode or £17.99 for all ten of them.

You're not yet allowed to rent the series. Nor can you download it - this is a streaming only deal at this stage. Judging by the pricing - our eager PR lass was unable to say one way or t'other - it's standard definition too. 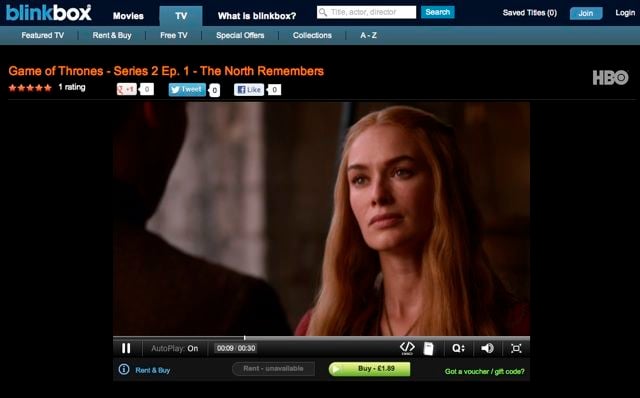 With no official word on the DVD release, Blinkbox is the only legitimate UK source for episodes, unless you have a Sky subscription and kept the series on your DVR.

Blinkbox said it will be offering a lot more HBO content over the coming weeks, though much of it isn't quite as fresh as Game of Thrones series 2 and Boardwalk Empire season 2, which also goes live on the service today. ®