A persistent spin helix sounds like a possessed washing machine rather than a doorway to a massive overhaul in the speed of computer electronics. Yet that's the science behind a breakthrough by IBM boffins, who have used spintronics to store persistent binary data.

Computers rely on electrical charge to hold binary information in memory, although faster in-chip caches rely on the state of transistor switches: during a typical processor cycle, the chip may need to look up some information in memory and issues a request to the RAM controller hardware. This uses the flow of electrons to detect the presence or absence of charge held in individual storage cells, which each represent a binary bit. These bits are then strung together to construct the words of requested data, and it takes up to a couple tens of nanoseconds to complete a read access.

Rather than sensing charge in DRAM capacitors, it's been suggested that another characteristic of electrons, their spin, could be studied instead. For this to work the spin has to be stable, settable and measurable. The benefit is that this property is very quick to sense, which means bigger banks of memory running fast enough to be tightly coupled to processors - much larger than today's fast silicon caches.

In fact, relying on the transfer of electrons could be done away with completely: rather than switching on and off chip transistors by flowing electrons into gates, the state of binary switches could be represented by electron spin. In theory this kind of system would be smaller and more efficient that existing technology.

The IBM Zurich boffins and buddies at the Solid State Lab in the ETH university in Zurich have lengthened electron spin lifetimes thirty-fold, but needed to cool the little beggars to 40 Kelvin (-233°C, -387°F) to achieve this.

They used a gallium arsenide semiconductor, crafted in an ultra clean room by the ETH boffins, and engineered an interaction between the spin and the orbit of the electrons around atoms. They managed to synchronise the spin of the electrons, like Blue Danube Waltz ballroom dancers in lockstep. Then they monitored how the spin of the sync'd electrons moved helically, like a screw thread's profile, inside the semiconductor. Their progress was monitored with ultra short laser pulses.

IBM's announcement stated: "Atypically, where such spins would randomly rotate and quickly lose their orientation, for the first time the scientists could observe how these spins arrange neatly into a regular stripe-like pattern, the so-called persistent spin helix." 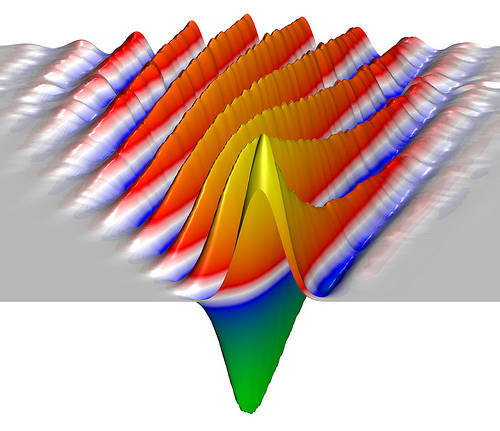 They showed that the spin direction of the sync'ed electrons was stable and observable for 1.1 nanoseconds, the time it takes, IBM said, for a 1GHz CPU to complete a cycle and much faster than DRAM - although this prototype lacked the overhead of controller electronics accessing arrays of data. This was the first demonstration of a 2003 theory that electron spin direction could be locked. The spin was pictured by using a time-resolved scanning microscope.

Spintronics are supposed to herald more energy-efficient CPUs and memories - but they will have to eventually operate at room temperatures (or thereabouts) otherwise the power needed to cool the miniaturised spinners will be vastly greater than any potential power savings.

The boffins - M.P. Walser, C. Reichl, W. Wegscheider and G. Salis - wrote up their work in a scientific paper titled Direct mapping of the formation of a persistent spin helix published in Nature Physics on 12 August 2012. ®