Perhaps the world’s most famous repurposed centerfold, the Lena test image, is now the world’s smallest test image courtesy of researchers in Singapore.

A*STAR (Agency for Science, Technology and Research) boffins have rendered the image of Lena Söderberg (familiar to computer science students the world over) at just 50 x 50 microns, with a resolution of around 100,000 DPI.

The researchers believe their micrometer image is at the limit of resolution because of light’s diffraction limit: if the print “dots” get too small, diffraction between neighbouring dots will blur the image. The visible spectrum of light centres at around 500nm (nanometers), resulting in a diffraction limit of 250nm, according to Nature, which is the spacing the researchers used. 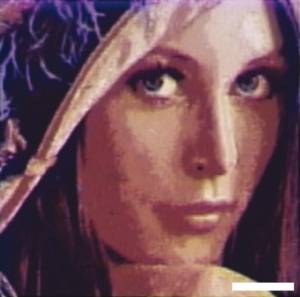 The A*STAR research didn’t use coloured ink to product its image. Rather, they selected particles by size, since the electrons at the surface of different-sized metal nanoparticles resonate at different wavelengths – a phenomenon called plasmon resonance.

“We saw that we could control the colours, from red to blue, by controlling the size of the particles”, A*STAR’s Joel Yang explained.

Each pixel in the researchers’ image is created using four nanoscale posts, topped with gold and silver disks. The posts were created using electron-beam lithography, after which the nanodisks were deposited. The wafer was then coated with a metal to reflect the coloured light from the pillars.

Because colour is created not by ink, but by the structure, the researchers say their images would be very durable, and while the printing process might never replace the home inkjet, the Yang says it could be used for creating watermarks, in high-density permanent data storage, or in cryptography. ®

Imaging historians have marveled at the popularity of the Lena image the team used in their experiments.

Lena is possibly one of the most used image testing shots in existence, and the lady in question is Swedish model Lena Söderberg, who appeared in the November 1972 issue of Playboy. A the University of Southern California Signal and Image Processing Institute (SIPI) were looking for an image to scan using a new Muirhead wirephoto scanner and and a Hewlett Packard 2100 minicomputer.

As they were looking for something fresh and new to scan an unnamed passerby mentioned (as you do) that he happened to have a copy of the issue – not doubt strictly for reading the articles. Before you scoff too loudly, November 1972 was Playboy's best-selling issue of all time, with over seven million sold to date.

The resultant 5.12-inch squared image left the magazine's owner with the parts of Ms Söderberg he was probably most interested in and was used in a conference paper, but struck a chord among the technology community. The reasons for this are two-fold, recounts David Munson, former editor-in-chief of IEEE Transactions on Image Processing.

"Second, the Lena image is a picture of an attractive woman. It is not surprising that the (mostly male) image processing research community gravitated toward an image that they found attractive."