Server for sale in the US and UK

While Hewlett-Packard has not yet formally announced any ProLiant servers based on Intel's Xeon E5-4600 processors for four-socket boxes, we knew from SPEC CPU benchmark tests that a blade called the BL660c Gen8 is on the way. And now we know a DL560 Gen8 rack-mounted box is in the works, too, with the machine on sale in the US and UK even though HP has not cracked the champagne bottle on its chassis yet.

As you can see from the feeds and speeds of the DL560 Gen8 machine, the box sports up to four processor sockets and up to 1.5TB of main memory across its 48 memory slots. HP is supporting all eight variants of the Xeon E5-4600 processors inside the machine, including 95 watt, 115 watt, and 130 watt processors that come with four, six, or eight cores.

The machine comes with two processors standard, but if you want the full memory addressability of the system and the full I/O capability, you need all four processors to be plugged in because the memory controllers and PCI-Express 3.0 controllers are on the die, not on the mobo. This is exactly the case with all Xeon E5-4600 machines, not just those made by HP.

The server has five 2.5-ich drive bays, which run along the bottom of the unit, below much larger system fans. While this is not a lot of storage for a machine of this processing capacity, you can't expect more than that in a 2U rack form factor if you want a lot of airflow coming in from the front. Frankly, packing all of that processing and memory in such a small space and not having it melt is a feat of engineering triumphing over thermodynamics. And as a comment below indicates, Dell crams sixteen drives in its four-socket PowerEdge R820 in the same 2U space, which is even more impressive.

The system has an embedded Smart Array P420i/ZM RAID 0 and 1 disk controller, which can be upgraded with models with 1GB or 2GB of write cache and RAID 5 support.

The machine has three PCI-Express 3.0 slots in the base configuration coming off a riser card and hanging off the first processor (one x4, one x8, and one x16), and with the addition of the second processor you can add one of two extra riser cards that sport three slots (two x8 and one x16) or two slots (two x16).

That second riser card would allow for up to three GPU coprocessors to be crammed in, which would make a very fine fat computing node in a supercomputer cluster. But it is not clear that the DL560 Gen 8 has enough juice coming off its pair of 1,200 watt power supplies (which run at 94 per cent efficiency) to power up four processors, loads of memory, and three GPUs.

Here are the feeds and speeds of the three base configurations of the DL560 Gen8 rack-mounted server in the United States: 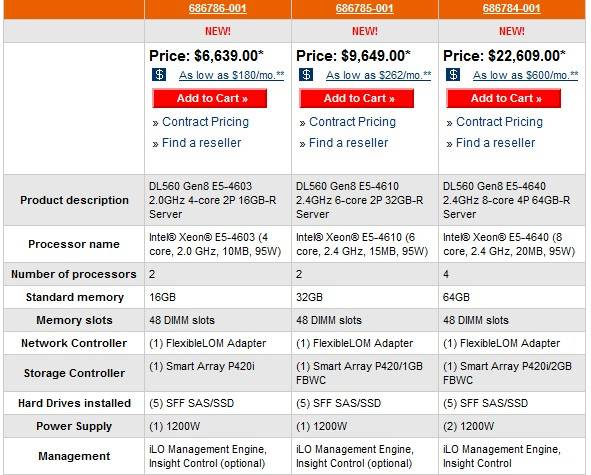 US specs for the ProLiant DL560 Gen8 server

Here are the specs and pricing for the same machine sold in the United Kingdom: 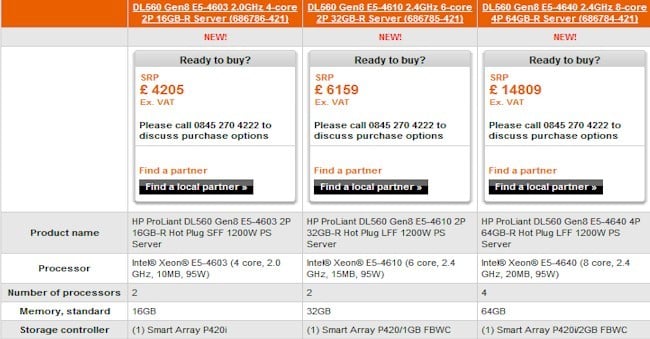 At prevailing exchange rates of 1.57 US dollars to the UK pound, the prices being charged for the new machines are essentially the same. The top-end configuration with four processors, 64GB of memory, the best RAID controller, and two power supplies is 2.7 per cent cheaper in the US than in the UK, which is not the kind of gap we sometimes see among IT vendors. It is often a lot larger, in fact. ®