Application monitoring tool provider Boundary, which only peddles its wares as a service running on a cloud, is offering potential customers a freebie version of the service to scare up some business.

The company is also rolling out a 2.0 release of the eponymous app monitoring service while at the same time partnering with platform cloud provider Engine Yard to integrate Boundary into its own cloud.

Gary Read, who came on board Boundary earlier this year to be CEO, is no stranger to cloudy tools. Read was founder and CEO of Nimsoft, which created a set of cloud-based tools aimed at helping service providers manage their systems and networks.

CA Technologies, formerly known as Computer Associates, acquired Nimsoft in March 2011 for a hefty sum of $350m, and the same sort of thing could happen a few years hence if Boundary takes off.

Boundary thinks that application and system monitoring is too complex for the kinds of static tools that were used in the old dot-com days, when IT environments themselves were static, Read tells El Reg.

The Boundary service can take in all kinds of operational data from systems through agents as well as taking in input from third party monitoring tools, provisioning tools such as Chef or Puppet, and the APIs from cloud providers such as Amazon EC2, Rackspace Cloud, SoftLayer, and Google Compute Engine.

All of this data is pulled out of the network stack from all of these devices, beamed up to the Boundary service, and chewed on real-time to create an operational dashboard for system admins so they can see trouble before it starts getting out of hand.

You can put the Boundary agent on physical servers and babysit them, too, so long as they run Windows or Linux. The company has not seen demand for any Unix variants yet and so has not created an agent for Solaris, AIX, or HP-UX.

The Boundary service, which launched in early April, now has around 50 paying customers, which is a good start, but that it wants to grow the base. The code behind the Boundary service is not open source, and is not going to be, but the company can give away access to the code for tire kickers and modest users, and that is precisely what the company has done with its Boundary 2.0 release announced this week. 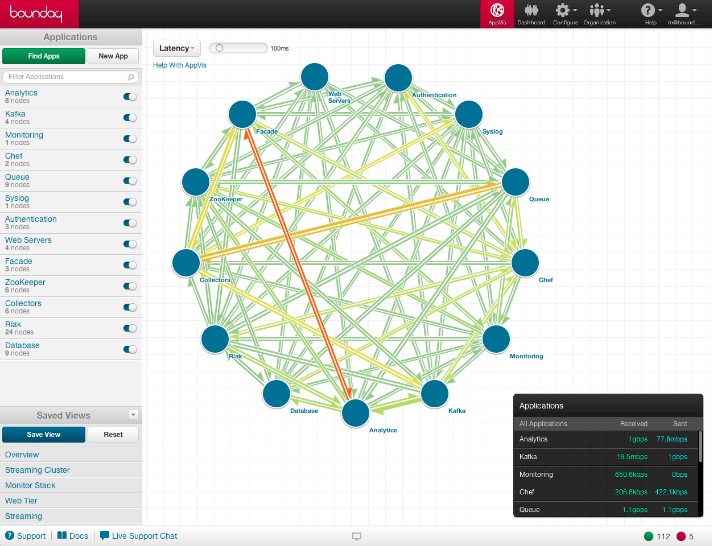 With the freebie Boundary service, all of the bells and whistles work, but the company puts some limitations on it so you don't get carried away and drive up its own costs on its cloud. THe service is hosted at an Equinix data center in Ashburn, Virginia, like Amazon's EC2 location on the East coast of the US.

Customers using the freebie version can accumulate 2GB of operational data per day, and they can store up to one month of data. Depending on the nature of your application servers, Read says that this is enough capacity to monitor maybe 15 to 20 application servers running in your data center or in a cloud (or a mix of the two).

If you want to get the paid version of the service, with full tech support and the ability to store that 2GB of daily operational data for as long as a year, then you pay $199 per month, and if you want to store 5GB of data per day, then it is $395 per month.

Engine Yard, the platform cloud provider, is partnering with Boundary to offer the service to monitor applications running on its cloud as part of the 2.0 release. There are also predefined integrations for Amazon EC2 and Rackspace Cloud as well as the ability to suck in RSS-based status alerts from devops tools from New Relic, Splunk, and Papertrail.

Boundary raised $4m in its Series A round back in January 2011, and in late July raised another $15m to help it build up the business. ®