A workstation of sorts for K developers

The University of Tokyo has gone back to Fujitsu for a second helping of K supercomputer.

The Institute for Solid State Physics is looking forward to next spring, when Fujitsu will fire up a PrimeHPC FX10 supercomputer that will be used to conduct materials research in high-performance solid state devices. The supercomputer will also be used for improving the efficiency of fuel cells and, believe it or not, in the creation of new drugs.

The second FX10 supercomputer going into the University of Tokyo comprises four racks, with a total of 384 nodes using the 16-core Sparc64-IXfx processor, which runs at 1.85GHz and which delivers 236 gigaflops of double precision floating point performance per socket. Four of these Sparc64 processors and four "Tofu" interconnect chips are on each server blade, with water blocks on the processors and main memory.

The PrimeHPC FX10 machine is designed to scale up to 1,024 racks with 98,304 compute nodes, 6PB of main memory across those nodes, and a little more than 23 petaflops of peak number-crunching power. Such a behemoth, which Fujitsu will probably never sell, would cost $655.4m at list price and would consume 22.4 megawatts of power.

Obviously, the new machine at the University of Tokyo is tiny by comparison, and can be thought of as a workstation on which massively parallel Linux applications can be developed and then run on the K supercomputer.

The K machine, at 10.51 petaflops sustained performance on the Linpack Fortran benchmark, is one of the most powerful in the world. The Institute for Solid State Physics (ISSP) will eventually get some timeslices on the K machine, which is based on the earlier eight-core, 2GHz Sparc64-VIIIfx processor and the Tofu 6D mesh/torus interconnect. That K machine has 22,032 four-socket server blades. 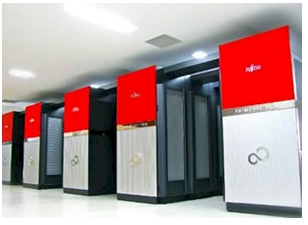 In April, the University of Tokyo fired up its first PrimeHPC FX10 supercomputer, nicknamed Oakleaf-FX, which was made from 50 FX10 racks glued together with Tofu (funny image, that) with 4,800 server nodes and a total of 76,800 cores to deliver 1.13 petaflops of peak theoretical performance. This is a real machine in its own right and can be used to do useful work beyond application coding.

The ISSP's FX10 super, which has yet to be given a nickname, is relatively tiny by comparison, at four racks and 90.8 teraflops of peak theoretical performance. But from little acorns big Oakleaf-FXs grow...

The ISSP machine will have 12TB of main memory across its 384 nodes (by which Fujitsu means sockets since this is not an SMP or NUMA machine). It will run Linux, as the K super and its FX10 children all do, and will be front-ended by six Primergy RX200 S7 and six Primergy RX300 S7 Xeon-based servers hooked to two Eternus DX80 S2 storage arrays used as log-in management nodes.

The baby FX10 box will be back-ended with four Eternus DX80 S2 arrays with a total of 129.6TB of capacity, and the array will run the Fujitsu Exabyte File System (FEFS), a variant of the Lustre cluster file system that was designed to span 100,000 nodes. ®