Astroboffins have spotted a galaxy cluster that's breaking all the cosmic rules, including coming back to life to spawn stars at an enormous rate.

The Phoenix cluster is spewing out the celestial bodies at the highest rate ever observed for the middle of a galaxy cluster; it's the most powerful producer of X-rays of any known cluster; it's one of the most massive of its kind; and the rate of hot gas cooling in the central regions is the largest ever observed.

According to the scientists, the cluster is "experiencing a massive starburst" that's forming the equivalent of 740 Suns every year.

“Central galaxies have typically been referred to as ‘red and dead’ - just a bunch of old stars orbiting a massive black hole, and there’s nothing new happening,” said Michael McDonald of Massachusetts Institute of Technology (MIT), lead author of a study of the cluster. “But the central galaxy in this cluster has somehow come to life, and is giving birth to prodigious numbers of new stars.”

While these "red and dead" central galaxies are effectively space graveyards, boffins have often thought they shouldn't be. That's because the hot gas in a cluster core, gathered from nearby galaxies and supernova explosions, should cool over time and condense to form new stars.

But scientists have never before spotted a cluster that's cooling at a rate to achieve star birth. In typical stellar formations, something prevents the gas from chilling, and one explanation suggests there is a supermassive black hole emitting enough particles to reheat the core.

“What’s interesting about the Phoenix cluster is that we see almost all the cooling that was predicted,” McDonald said. “It could be that this is earlier in the evolution where there’s nothing stopping it, so it cools and becomes a starburst. In fact, there are few things forming stars in the universe faster than this galaxy.” 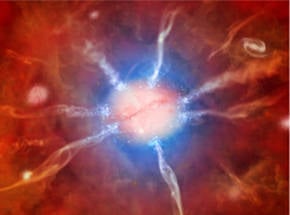 The Phoenix cluster was first spied in 2010 by the South Pole Telescope (SPT), but the boffins have now used NASA's Chandra X-Ray Observatory - a space telescope - to look at all the large clusters the SPT had found to measure their X-ray strength. Once they saw that the Phoenix was by far the brightest cluster, the researchers used ten different telescopes on Earth and in space to figure out its features.

Although the Phoenix also has a black hole at its centre, the gas is still cooling to form stars.

"The supermassive black hole lurking in the galaxy's nucleus seems to be asleep at the switch,” Brian McNamara, professor of astrophysics at the University of Waterloo, said. “But once the black hole gets going and begins to push the hot atmosphere aside, perhaps in another 100 million years or so, it should shut down cooling and reduce the star formation rate in a feedback process that is active in most galaxy clusters.”

He added that the Phoenix could be an example of how the most massive primeval galaxies formed.

The study was published in Nature. ®