One predator snuffs it and others follow in its wake

Boffins have proved a theory for the first time that the extinction of one animal has a domino effect on other species.

The researchers from the University of Exeter found that when a carnivore dies out, other predatory species could soon follow.

The bioboffins used parasitic wasps to prove the ripple-effect one extinction can cause.

In the tanks that only held one kind of wasp, the second went extinct within a few generations, but if both types of insect were kept in a tank, they thrived.

The second extinction was caused by the food running out. When the wasps that ate one of the aphids or greenflies weren't around, that bug grew in numbers, threatening the other little flies survival and therefore the second species' food.

"Our experiment provides the first proof of something that biologists have argued for a long time: predators can have indirect effects on each other, to the extent that when one species is lost, the loss of these indirect effects can lead to further extinctions," head boffin Dr Frank van Veen said in a canned statement. 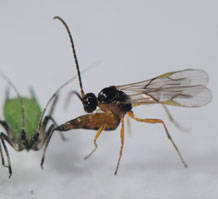 "Although our study focused on insects, the principle would be the same for predators in any ecosystem, ranging from big cats on the African plains to fish in our seas."

Van Veen, who works at the university's Centre for Ecology and Conservation, said the study showed that trying to save just one kind of animal in an ecosystem could end up hurting it and other predators in the area.

"A ‘single species’ approach to conservation can be ineffective and even counter-productive," he argued. "For example, protecting cod could lead to increased fishing pressure on other predatory fish which then, by the mechanism we have demonstrated here, could lead to further negative effects on the cod."

The study was published in the Royal Society journal Biology Letters. ®