There's been a veritable jetstream of activity at the SPB's mountaintop headquarters this week as our quest to find a method to fire our Vulture 2 spaceplane's solid rocket motor at altitude nears its end.

Followers of our audacious Low Orbit Helium Assisted Navigator (LOHAN) mission will recall that reader Neil Barnes gamely stepped into the fray a couple of months back with his own barometric altimeter, which was our first line of attack.

A quick blast in the Rocketry Experimental High Altitude Barosimulator (REHAB) chamber proved almost fatal for the poor altimeter, although it did survive and Neil was able to fix the code glitch which scuppered the indicated altitude readout.

However, Neil reported issues with the pressure sensor readings at simulated high altitude, as he ran further tests in his own vacuum chamber.

The accuracy fell off sharply as the pressure curved flattened out, and since the pressure difference between our target test simulated altitude of 76,500ft (23,300m) and, for example, 85,000ft (25,900m) is only 10mbar, it's clear that even a small percentage misreading of the pressure could result in premature ignition, or no ignition at all.

There's also the question of just how high these pressure sensors will work, so we asked high-flying HAB (High Altitude Ballooning) honcho Dave Akerman, to see if he had any data from one of his record-breaking flights.

Dave was sceptical about the viability of the barometric altimeter plan, and suggested - in common with many Reg readers - that GPS is the way to go.

He swiftly put us in touch with Anthony Stirk, who had a hand in the splendid Raspberry Pi In The Sky mission, and who he reckoned might be working on something of interest.

Anthony is technical director of Nevis Computers, but in his spare time runs HAB Supplies, and also forms part of Project Swift, which is planning "Long Duration HAB Flights To Europe!"

Fans of our Paper Aircraft Released Into Space (PARIS) triumph will be aware that we successfully used APRS here in Spain, but it's not that feature of the Swift Rev2 which got the LOHAN team's juices flowing.

Here are a couple of snaps of the board: 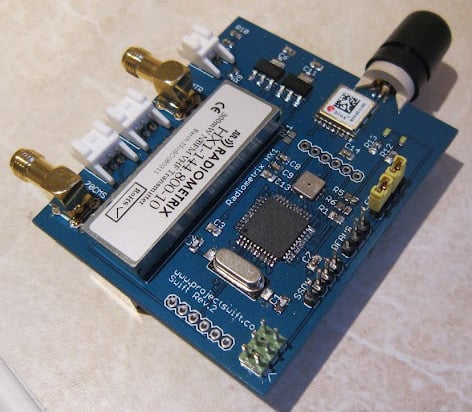 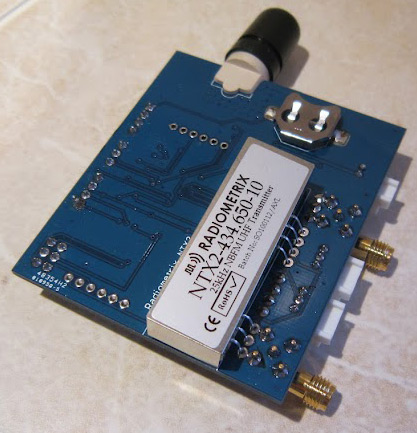 The bits and pieces are:

Anthony told us the Bosch Sensortec BMP085 pressure sensor "tops out at about 34km", or 111,500ft in old money, but agreed with Dave Akerman that its accuracy might be an issue.

The uBlox MAX-6 GPS, however, is good to 50km (164,000ft)*, and at this point Anthony suggested we use this to fire the Vulture 2 custom igniter, via one of the five general purpose input/outputs (GPIOs) on the board.

He then magnificently made us an offer we couldn't refuse: to put together a Swift Rev2 specifically for LOHAN.

A flurry of emails later, and the deal was done. Neil will be handling the coding and any breakout requirements, such as for external battery packs to fire the custom igniter, while Anthony is as we speak hard at work with the soldering iron, lovingly crafting our custom board:

Anthony asked us to give a tip of the hat to the UK High Altitude Society (UKHAS), Phil Heron and Nigel Smart, for their invaluable contribution to the Swift Rev2's development, and we're happy to do so, as well as inviting readers to raise a pint or two to our latest LOHAN collaborator.

As is the local custom, we'd like to give you a bit more background on Anthony. He told us he's had "a keen interest in computers, electronics, space and photography since an early age, being weaned on the Commodore 64, an electronics set I got for Christmas, and my dad's habit of reading me books about space".

He added: "I got into HABing about three years ago when I saw Rob Harrison doing launches from Cambridge and saw a way to combine all my interests in one. To me it’s like Lego for grown up people."

He concluded: "I’m a 39-year-old geek, with a full amateur radio licence, oddly no matching beard, married with an extremely understanding wife, have a small dog** and I like Islay Whisky."

Good stuff. So, it looks like we have a plan. Before you lot weigh in and start demanding details, we'll have more on how we'll be using the Swift Rev2 next week, once we've agreed with Neil just exactly what we need it to do.

We can say that apart from the main GPS-triggered igniter system, we will program an electronic failsafe option in the event that the GPS doesn't deliver.

We stress that we're still committed to an entirely independent mechanical failsafe option, should the electronics package go completely titsup. ®

*Just to clarify once again, there's a common misconception that GPS chips are restricted to an altitude of 18,000m (59,00ft) or a velocity of 515m/s (1,152mph), to prevent ne'er-do-wells launching their own cruise missile. That's actually 18,000m AND a velocity of 515m/s, so it's not an issue for the electronics aboard our our fantastical flying truss.

**For the record, the small dog in question is a Patterdale Terrier.